Comedian Eric has left his followers speechless after revealing that he is supporting businessman Jimmy Wanjigi for presidency in the coming 2022 general election.

Omondi endorsed Wanjigi via an Instagram post while calling for fresh blood to take on the country’s leadership.

“It’s time for a fresh start, fagia wote!!! We are standing with @jimmi.wanjigi,” Omondi’s post read, accompanied by a video of himself and several youths calling on the youths to support the businessman.

In the video, Omondi who is walking on a highway as he is joined by some youths is heard saying that Kenya has been free for the last 57 years but the youths have not known any freedom.

“Hello youths we have to take back our country, this country has been free for 57 years, but the youths have never known freedom,” Omondi said. 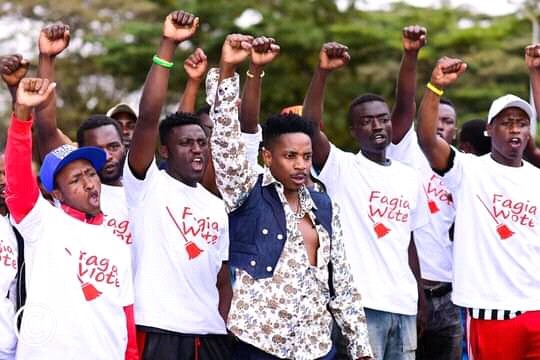 “How is it that teachers have been on strike since I was in class one and now am through with college they still strike,” he lamented.

Omondi  went ahead to mention some political bigwigs who should be done away with when it comes to elective posts.

“We have to mention names, Kalonzo, Mudavadi, Ruto and Raila,” Omondi said.

The comedian expressed his confidence that the youth will rule the country after the 2022 general elections since they have the numbers.

“It time, we have to take the parliament, senate and the statehouse,” he went on.

According to him, the only person who understands the youth and their needs is Jimmy Wanjigi.

Last month, Wanjigi revealed that he will vie for presidency through the ODM ticket while saying it was time for fresh blood to bear the party’s flag.