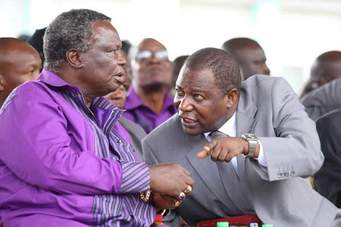 Cotu Secretary General Francis Atwoli has started laying down plans that would define his legacy which is coiled up in a budget of 1.1 billion.

Atwoli will lead Masinde Muliro University’s effort to raise money for the construction of the Dr. Atwoli International Centre for Labour and Leadership Studies (DAICELLS) at the university.

DAICELLS is expected to build a pool of skilled, adaptive, self-reliant and enterprising labour force for realizing the ‘Big Four Agenda’ currently under implementation by President Uhuru Kenyatta.

The trade unionist held a meeting to strategize on the plan with Education PS Samson Nabukwesi and the university council at the Tom Mboya Labour College in Kisumu on Saturday, October 17.

While addressing the council in a past event, Atwoli expressed that he was honored that the university has conceptualized the centre to be named after him.

The centre will be housed in the School of Business and Economics, offering academic and executive programs in labour and industrial relations as well as public and private sector leadership and management.

In a meeting with @MMUST_Kenya council together with PS. Nabukwesi at Tom Mboya Labour College. The meeting was on the planned construction of Dr. Atwoli International Centre for Labour Studies at the University. I will spearhead the fundraising of about 1.1B for the construction pic.twitter.com/VyDmDAqxu3

The center will be building according to the highest international standards.

The building will also be used to carry out research and disseminate findings on workplace related issues.

Atwoli, who is an alumni of the university, has promised to help building collaboration between the DAICELLS and the International Labour Organization (ILO).

“It is envisioned that the centre will enable the sub-saharan region to achieve milestones in developing quality manpower for industrial and labour relations. We hope to address the strategic options and modalities identified for the national agenda as a foundation for Vision 2030.

This center will create a platform for engagement and negotiation between governments, labour movements, key stakeholders and collaborators,” Atwoli stated during a past address at the university.

Atwoli joins a list of prominent leaders with who are immortalised through buildings such as the William Ruto Leadership Institute (WRLI) in Makerere University and the Mama Ida Library and Resource Centre at Ogande Girls in Homa Bay County.

The leader and General of the National Resistance Movement Miguna Miguna had some words to give to Barack Obama's elder brother, Malik Obama and...
Read more
- Advertisement -
Coronavirus

The Spanish government has asked pregnant women, to stop congesting the health system with their “selfish concerns like childbirth”, with the aim of controlling...
Read more
Business

Central Bank of Kenya has opened a new branch in Kisii to ease the distribution of cash to counties in Nyanza region. CBK Governor, Dr....
Read more
Death

The Building Bridges Initiative (BBI) report was unveiled on Wednesday by President Uhuru Kenyatta and ODM leader Raila Odinga. The document has been touted as...
Read more
Coronavirus

The Spanish government has asked pregnant women, to stop congesting the health system with their “selfish concerns like childbirth”, with the aim of controlling...
Read more
Business

Central Bank of Kenya has opened a new branch in Kisii to ease the distribution of cash to counties in Nyanza region. CBK Governor, Dr....
Read more
Death