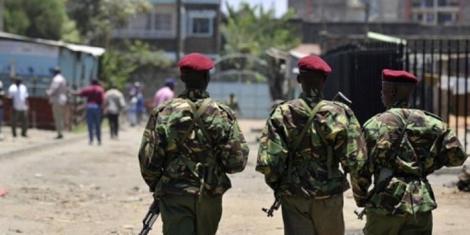 The DCI has arrested two police officers stationed at Mbururu Police Post in Kakamega County in connection with the murder of one suspect.

The suspect in question is Dennis Lusava alias Makali who was reportedly arrested on October 7, 2020 for allegedly failing to wear a face mask.

Different reports coming from the police claims that the suspect was arrested for assaulting a police officer.

Mr. Lusava disappeared after 24 hours only his body to be found floating on River Nzoia in Webuye on October 11, 2020.

Through a communication issued on Sunday morning, the Directorate of Criminal Investigations(DCI) said the detectives probing the death of the late Dennis Lusava have arrested two police officers for interrogation.

“Both officers are in our custody for investigative interviewing,” said the DCI.

Autopsy performed on Lusava revealed that he lost his life from a repeated blunt force trauma.

Reliable sources disclosed that Lusava was tortured by 7 police officers wielding whips and clubs, this source proved reliable after the recovery of five anti-riot clubs and two electricity cables believed to have been used to whip the suspect were recovered.

“The OCS who responded to the complaint went ahead to the patrol base where he found the rowdy mob of about 200 people, and his attempt to address them fell on deaf ears,” said the DCI on October 9, 2020.

The DCI added: “Instead, the mob pelted stones on him where he incurred serious injuries and was rushed to the hospital, before torching the patrol base and damaging the police motor vehicle.”

According to police, Lusava was arrested on 7th October 2020 for assaulting the officer in charge of Mbururu patrol base but was released on a free bond at 12.40 pm pending the filing of a P3 form.

The suspect’s mother went to the base the following day and reported that her son never went home after being released, whereby she was referred to the OCS Matunda Police Station for further assistance.