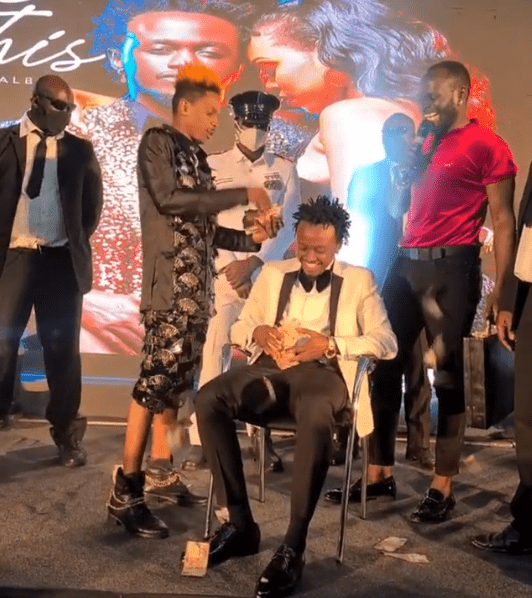 Comedian Eric Omondi continues to feel the wrath of Kenyan musicians including Bahati after claiming that the music industry is dead.

According to Eric, the Kenyan Music industry died the moment some musicians got married.

“My message is we lost something and my point is together we can find and bring it back. Sautisol, Khaligraph Jones and Bahati you are our only hope but truth be told tangu muoe things have not been the same. I cannot sit back and watch our Industry go to sleep and keep quite,” he posted.

Responding to Omondi’s sentiments, Bahati said that Eric lost his mind after launching his show Wife material while criticizing his comedy.

He further said that he will edit his latest music video to remove the part that the comedian was featured.

“In fact I am Going to Re- Edit My Video #Adhiambo Just Remove the Part I put to Promote Your Career! Lastly, give me a Call I give advice on how to Respect Women coz the Clout Chasing Move you Made to the Mother of your Son Jackie Maribe was Só Lame; a DeadBeat Dad has no Authority to Lecture Our Music Industry… Infact @EricOmondi Umekua Mtu Bladi Fakin,” Bahati went on.

The comedian has however continued to insist that the music industry is dead while giving musicians a period of two days to come up with a way forward and plan for the future of the industry.

He also said that if the artists fail to do so, we will rally Kenyans to boycott their music.

“I am giving the ENTIRE MUSIC Industry two DAYS to Come up with a COLLECTIVE Plan and Way Forward on the Future of KENYAN MUSIC!!! Otherwise we WILL RALLY Every Kenyan FAN to HELP US BOYCOTT and DISBAND this USELESS BATCH😡😡😡😡. I will not sit back and Watch my COUNTRY GO to the DOGS Because an ENTIRE INDUSTRY is DEFIANT, SLEEPY and COMPLACENT!!! We will RAISE and SUPPORT A NEW GENERATION of TALENTS To take Over and lead us to the FUTURE!!!” Eric said.