Sonko had on Sunday, hit out at NMS over filth in the city, further sharing pictures of heaps of garbage in Pipeline. 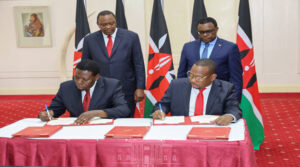 “Nairobi Super Governor who is also the President of the Republic of Kenya and commander in chief of Defence forces Uhuru Muigai Kenyatta and Saddam Hussein (referring to Gen. Badi) really overworking in Pipeline Embakasi South Constituency. Keep up with a good job, ” Sonko ironically said in a tweet.

But NMS boss has hit back hard claiming that certain “saboteurs and detractors” were behind the heaps of garbage in the city.

“As saboteurs and detractors heap garbage on timelines, NMS and the people of Nairobi desirous and fully cognizant of their role in a clean environment are at work each day 3000 tonnes against meagre kilos collected in the past closer to a clean city, a green City, ” NMS tweeted .

Since Sonko surrendered four key county functions to the national government now under the leadership of Badi, the governor has continued to poke holes at the deals and criticized Badi, who seems to be outperforming him and earning admiration from Nairobi residents.

Sonko signed the Deed of Transfer of the functions to the national government on February 25. They include Health, transport, public works and planning, and development services.

The move was meant to ensure smooth running of services in the city but it seems to have complicated things with President Kenyatta’s efforts to have the two work together hitting the rocks.

On his part, Badi has severally accused Sonko of frustrating him by refusing to sign budget allocations to NMS, saying he is forced to borrow from the national government.

“I borrowed initially because I didn’t have any funds for the first three months because the governor had blocked it…we started by getting money from national government through different ministries, we coordinated and took it as an all government approach to clean up Nairobi,” said Badi while speaking to Citizen TV a few days ago.

Badi refuted claims that he is out to ruin Sonko’s political career, adding he is focused on improving the capital’s infrastructure.