According to Junet, there was peace and calmness in Migori on Saturday, September 25 when DP Ruto visited the county because of the handshake between President Uhuru Kenyatta and ODM leader Raila Odinga.

Through a tweet, Junet said that even the politicians that were against the handshake are now benefitting from it.

“Congratulations the people of Migori for demonstrating that HANDSHAKE changed the politics of Kenya. Even anti-handshake prophets of doom are benefiting from the peace, unity and stability across the country,” he tweeted.

Netizens flooded the comments section with some criticizing him for having such thoughts.

“It is not handshake ngombe. Ni ile wajinga waliisha Kenya and people have matured democratically. So long as you ODM leaders don’t incite people, Kenya have always been a peaceful place until Baba says otherwise!” a twitter user wrote. 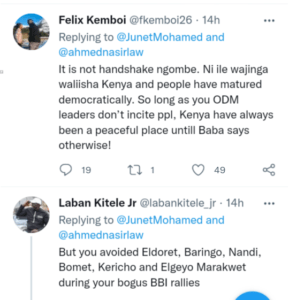 “But you avoided Eldoret, Baringo, Nandi, Bomet, Kericho and Elgeyo Marakwet during your bogus BBI rallies,” another responded.

“It’s not the handshake but the new political narrative of empowerment that has changed the outlook plus people just want change It might have taken them a little longer but I assure you that they have decided that it Dr Ruto,” said a twitter user while another said, “You are consoling yourself Migori is our bedroom currently soon Siaya take note.” 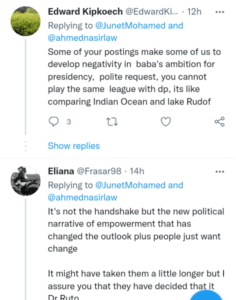 Rowdy youth disrupted a Wanjigi delegates’ meeting that was to take place at Maranatha Faith Assemblies church’s hall in Migori town on September 17.

The youth invaded the hall armed with stones and crude weapons and started beating the delegates.