Vera Sidika is not going to take any non-sense from some of her followers whom she at times refers to as mosquitoes.

The socialite took to her Insta stories to angrily slam one Mama Africa who asked her to stop overworking her daughter Asia, by frequently posting her on social media.

“Aaai, let the baby breathe. Too much social media is not good for her at this young age,” Mama Africa wrote to Sidika.

Sidika however shared a screenshot of her blocking the follower and asked her to give birth to her own child to keep him/her off social media.

“Bring this bullshit to me  and get blocked. No mosquito will  tell me how to raise my kid.  Y’all didn’t carry her for nine months to have opinions on how she should be raised. Zaaa wako ufiche . Please mind your uterus as I mind mine,” Sidika said.

In a separate post she said that she would also block those who will ask her to shave her daughter’s hair after another follower said that it was only for her own good.

“Also blocking everyone writing this hair nonsense to me or Asia’s page. This was on her page. Please zaa wako umnyoee!! You didn’t carry her on my behalf to tell me what do with her hair,” Sidika warned.

The concerned follower said that she was speaking out of experience in a bid to save Asia’s hair.

“You better shave that birth hair. The more you keep it, the more you ruin the texture, later when you will have no option but  shave the result won’t be pleasing. Just motherly advice, speaking from experience,” the now blocked follower had said. 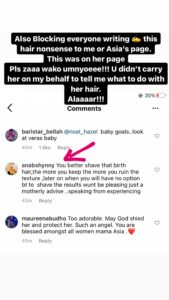 This comes just a day after Sidika’s long term enemy Huddah Monroe indirectly slammed Sidika claiming that her daughter was aging because of working on social media daily.

RELATED STORY: “Your Baby Is Aging Fast Because Of What You’re Doing To Her” Huddah Monroe Savagely Tears Into Vera Sidika