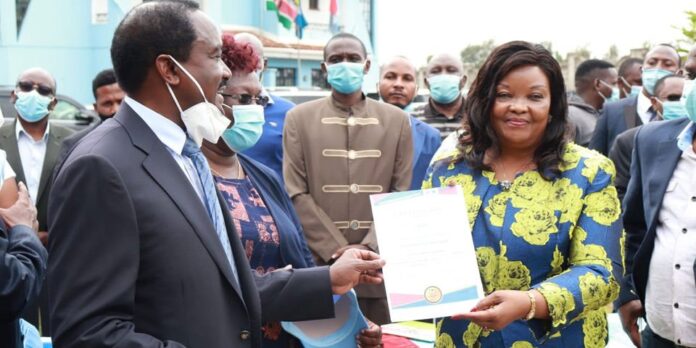 Kavindu is the ex-wife of former Machakos Senator Johnson Muthama.

Led by Wiper party leader Kalonzo Musyoka, Kavindu was awarded the Wiper ticket to battle it out with other candidates, including one fielded by her former husband, Muthama at the ballot.

Speaking after receiving the party certificate on Wednesday, January 13, Kavindu said she quit the Jubilee Party “with the blessing of the party leader”.

Sources told the Nation at first the Kalonzo-led party thought of fielding Jennifer Mueni Kabaka – one of Senator Boniface Kabaka’s widow but changed its mind in favor of Kavindu.

The wiper party is reportedly keen on using the bitter divorce between Muthama and Kavindu to silence Muthama’s force in the region.

“Agnes Kavindu is our sure bet to silence Muthama once and for all. All our party elected MPs and MCAs from all counties will camp in Machakos to ensure we clinch the seat,” said a party operative who did not want to be named told Nation.

Kavindu is a member of the Building Bridges Initiative (BBI) taskforce. On the other hand, Muthama is the interim national chairman of the United Democratic Alliance (UDA) party, which opposes the BBI initiative.

UDA is yet to field a candidate in the Machakos by-election.

This implies that Muthama will have to publicly crusade against his ex-wife as he pushes for the election of his UDA candidate, with their messy divorce likely to dominate the campaigns.

Kavindu’s candidacy brings an interesting political twist to the Machakos contest as the two are embroiled in a court battle over Mutham’s business fortune, where Kavindu is demanding an equal share of matrimonial properties.

Kavindu will face competition from former cabinet minister Mutua Katuku who is running on a Maendelao Chap Chap party as well as from UDA yet to be named candidate.

The Independent Elections and Boundaries Commission (IEBC) will clear all the interested candidates on January 18.

Katuku has accused the Wiper party of introducing the senatorial by-election into a “bedroom affair” by nominating Kavindu “to settle political scores” with Muthama.

“This election is about the best candidate to replace the late Senator Kabaka and serve the remainder of this term. To reduce the campaign platform into an extension of the divorce court proceedings between Muthama and his ex-wife is an insult to Machakos voters,” said Katuku.

Related: How Wiper Members Are Set To Lose From The Coalition Deal With Jubilee