Photos of the two getting cosy inside a car were widely shared on social media on Thursday and it was very clear that the two had locked lips.

Responding to a local media site, Nyamu wondered whether the site had lacked something to write about to an extent of making up a ‘false’ story.

“Ni story mumekosa? If this is how you kiss, si mko chini sana!” Nyamu told off Mpasho news. 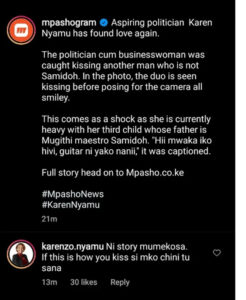 Nyamu is not new to controversies as she recently claimed that together with women, they want Chuma ya Doshi alluding to DP Ruto’s administration while at a campaign tour in Kenyatta market, Nairobi on Tuesday.

She was however unapologetic about her remarks saying that she would be using them in rallies henceforth.

“As women, we are opposed to a few people holding meetings in hotels and forcing down our throats an old candidate. We prefer a younger energetic leader like Ruto ready for work,” she said in an interview with The Standard.

“I will repeat it in my next political speech anywhere because that is the truth, I will not sugarcoat it, Kenyans women want a young and energetic leader,” she continued.