Watch: Shock As Man Is Nearly ‘Shredded’ By Train Along Suswa SGR 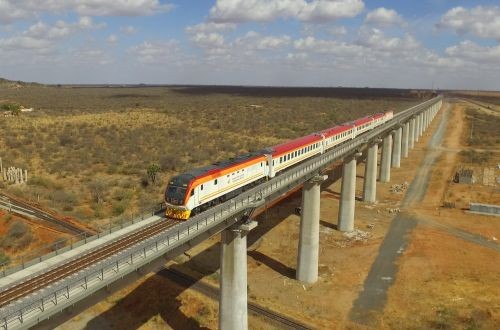 An unidentified man nearly lost his life while on the Standard Gauge Railway(SGR) line in Suswa. Sources reveal that a train was forced to make an emergency stop after the man was spotted walking on the flyover line.

A video shared online shows the man walking on the railway line but it is not clear how he got up there.

According to witnesses, the man is not among SGR line operators and it seemed that he spend his night there.

“We don’t know him, we just saw him there. He was nearly shredded. It is like he slept there. A helicopter must come to remove him from there. He is not one of the SGR workers,” witnesses said.

@Ma3Route video 1/2 SGR Train from Suswa was forced to stop as a man was seen walking along the line pic.twitter.com/UaHTY0mQ8n

Reacting to the incident, a number of Kenyans believe that the man was not in his right mind as others claimed that he might have been under the influence of bhang to risk his life to that extent.

In a separate incident, a few years back, a woman nearly lost her life while attempting to board a moving train.

The woman slid at the doorstep as was pulled  a few steps on the rail before she eventually let go of the train. Luckily, she was boarding the last cabin of the train.

Woman narrowly escapes death while trying to board a moving train in Nairobi. pic.twitter.com/Cfs1FMZ85p

RELATED STORY:Oscar Sudi Reveals Why He Confidently Boarded Airforce Helicopter Yet He Is Among Unauthorized Persons