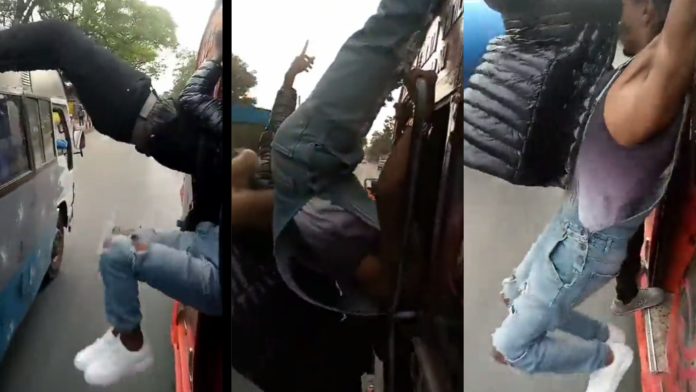 Two reckless matatu touts have caused a stir on social media after they were captured hanging dangerously on a Passenger Service Vehicle..

In a video seen by Sonko News, the duo were engaging in what one would refer to as Physical Exercise(PE)  or extreme sport while hanging on the door of the moving bus.

One of them dangerously came into contact with another bus that they were overtaking as the other nearly somersaulted putting his legs on top of the bus.

Below is the video of the touts.

According to Sikika Road Safety, the bus belongs to Ummoiner Sacco with number plate KDH112E. It is titled Opposite and the tout in dreadlocks is identified as Katana.

The video has angered Kenyans who have called upon the National Transport and Safety Authority as well as traffic police to take action against the notorious touts. This is because they endangered the lives of other road users in the process. Below are some of the comments.

“We said it is their life, lets look after ours,” read a comment

“But they endanger the lives of others in the process. If they are the only road users I would understand. Supposing the other minibus has to maneuver some obstacle, the driver would be limited in his options,” a netizen responded.

“We need @redbull to sponsor these young guys so they can make something off these amazing stunts. It can be worked out to make it safer, of course. Let’s not just trash everything just because we don’t like it. Extreme sport is a big deal everywhere else,” another netizen defended them.

“These guys must be sought and arrested for trying to commit suicide. It’s actually Wrong. Even the driver should be careful with the people he is working with,” said another.

NTSA is yet to respond on the matter.