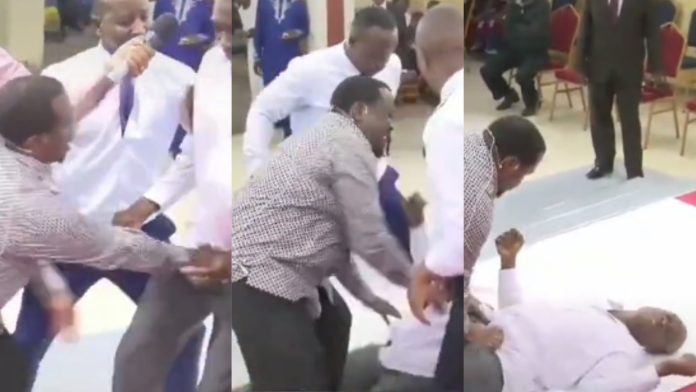 Congregants of the Jesus Is Coming Deliverance and Healing church that is led by Pastor Jeremiah Kioko were treated to a dramatic moment on a yet-to-be-identified date.

In a 140-second long video shared online,  the Apostle was performing healing on a man who had sought help over his low libido as the congregants followed closely on the proceedings.

However, before pronouncing healing on the man, who said is from Maragoli in Western Kenya,  the man of God asked him to jump severally but he was keen to get healing on his libido issues.

“Jump up first, leave alone your manhood,” Apostle Jeremiah told the man who was clinging to his ‘cassava’ leaving the congregants in laughter.

After the little exercise, the man was asked if he was okay and he insisted on wanting to get the healing.

The pastor performed healing on him after which he said he was okay and could feel his manhood. The pastor also confirmed that he was healed and that he could feel his transformer after the two got into contact.

He asked the man to send his wife a message saying, “I am coming and I am okay. Prepare good for me because the job will begin.” At the same time, the pastor also pronounced healing on his wife who had sex urge issues.