More
HomeNewsUnapologetic Otiende Amollo Flaunts His Ring After Miguna Challenged Him To Explain...

Controversial twitter man Miguna Miguna for the better part of Monday sustained his attacks on lawyer Otiende Amollo following the confession by Ambrose Rachier that he was a member of the freemasonry.

Miguna even challenged Otiende Amollo to explain why he puts on the same ring on his right hand that Rachier equally wears. This is what Miguna tweeted:

“Otiende Amolo has publicly DENIED being a member of the Freemasons DEVIL SOCIETY. That’s an ADMISSION that he is a Freemason. If in doubt, ask Otiende to explain to Kenyans in 100 words why he wears the same RING in his RIGHT HAND that Rachier also wears!”

Miguna went ahead to explain that Ambrose Rachier had a different ring from that of Otiende Amollo since Rachier was a very senior member of the society.

“Rachier’s RING is DIFFERENT because he is on the 30th DEGREE of DEVIL WORSHIP while Otiende is still a PUPIL being tutored. So, Otiende’s RING has a blue RUBY on its CREST. Kenyan Devil Worshippers must declare themselves like Rachier has done or be EXPOSED.”

However, the unapologetically Otiende Amollo on Tuesday updated his Facebook profile picture displaying the same ring that Miguna challenged him to explain. From the post, it was evident that the senior counsel was either unmoved by Miguna’s sentiments or he did not simply care about his rants. 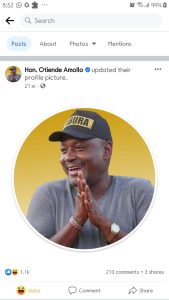 At the same time, the Canadian based lawyer claimed that freemasons perform strange events in windowless buildings while performing certain blood rituals.

“FREEMASONS conduct their affairs in total secrecy, hold all their meetings in pitch darkness in windowless buildings while their members (all men) are stark naked or wearing strange uniforms and strange rings and conduct rituals with blood. Can’t be good for society.” Said Miguna.

He continued: “Freemasons in ODM have been sacrificing LUOS for decades in their pursuit of power, wealth and glory. 2022 must be the year when Luos are LIBERATED from devil worshippers and conmen who have been sucking their/our blood.”

RELATED:Otiende Amollo Addresses Claims Of Being A Freemason After Being Linked To The Secret Organization