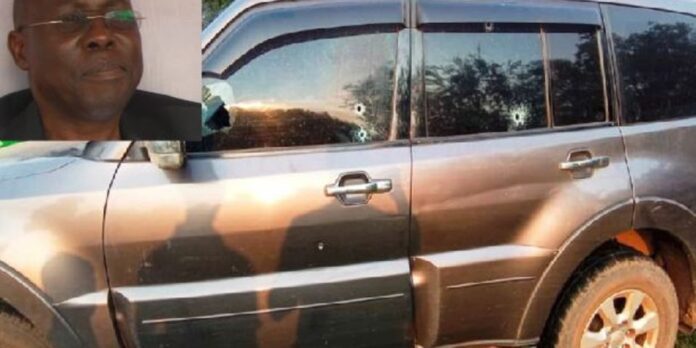 Ugandan Minister of State for the Vice Presidency, Baltazar Kasirivu-Atwooki on Wednesday morning survived an assassination attempted by gunmen who fired bullets at his vehicle.

The minister who is also the Bugangaizi West Member of Parliament was allegedly ambushed by gunmen around Kakora village, Nyalweyo town council in Kakumiro District, a few kilometers away from his home.

Dr. Kasirivu who was in his vehicle coming from a radion program faced gunfire where over eight bullets riddled through his vehicle.

Kasirivu and his driver escaped unhurt after his driver sped off from the scene of the incident.

Kasirivu told a Ugandan publication that he survived for God’s mercy. He suggests the ambush was politically motivated ahead of the Thursday, Jan 14, general elections.

“They almost finished our lives. As we were approaching my home at a swampy place, unknown people who were armed with guns opened fire on us. As gunfire raged, I told the driver to speed off and that is how we escaped unhurt. I don’t know who was behind this attack but I have informed the police. It was a miracle for me to survive,” he told the Daily Monitor.

According to the Minister’s bodyguard, the attack was laid by about two gunmen who were firing from both sides.

“I can confirm that there was a shooting at the minister’s car but we immediately dispatched police from Nyalweyo and more police officers are going to be dispatched to the scene of the crime to investigate the matter,” he said according to the publication.

Kasirivu is contesting for the Bugangaizi West Parliamentary seat on an independent ticket after losing in the NRM party primary election held in September 2020.