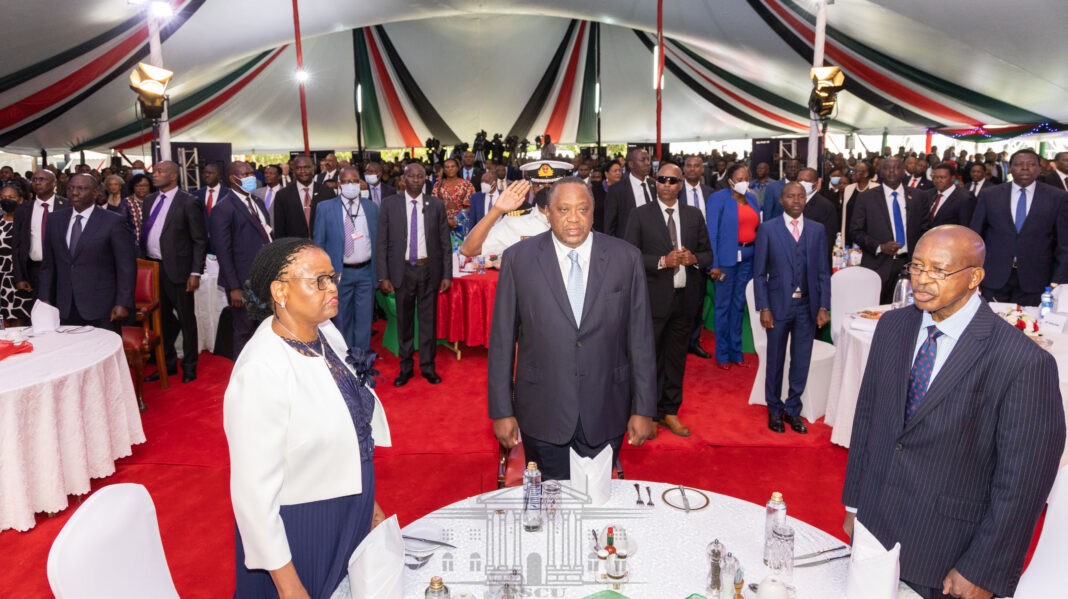 President Uhuru Kenyatta and his deputy  William Ruto  shared the same stage one more time during the National Prayer Breakfast.

The event was held at Safari Park hotel on Thursday May 26 in the morning, just days after the two leader met for the cabinet meeting at statehouse.

As it is the protocol, DP Ruto was first to address the gathering, before the head of state made his speech.

Ruto said that he feels honored to have served as president Kenyatta’s deputy, and specifically being the first DP under the new constitution.

“I also want to thank my brother president who has been my boss and leader for the opportunity to serve with him the people of Kenya.

“My friend president Uhuru Kenyatta as you head to retirement it is my prayer that God will give every aspiration of your heart and make it possible for you to enjoy the legacy that you have built and to enjoy every piece of the time that God will give you,” Ruto said

President Kenyatta responded to Ruto’s prayers concerning his retirement hoping that they would come true.

“With the grace of God I do hope the prayers of Hon William Ruto Come true. I am really looking forward to a lot of peace and enjoyment in the years to come, with God’s grace we will see each other in future, thank you,” President Kenyatta said.

President Kenyatta and DP Ruto have not been on good terms since the 2018 handshake. Their beef has even been displayed publicly, with president Kenyatta refusing to shake Ruto’s hand or even embrace him like before.

RELATED STORY:“Compete With Ideas Not Insults” Martha Karua Attacks Ruto Moments After He Surprisingly Honored Her