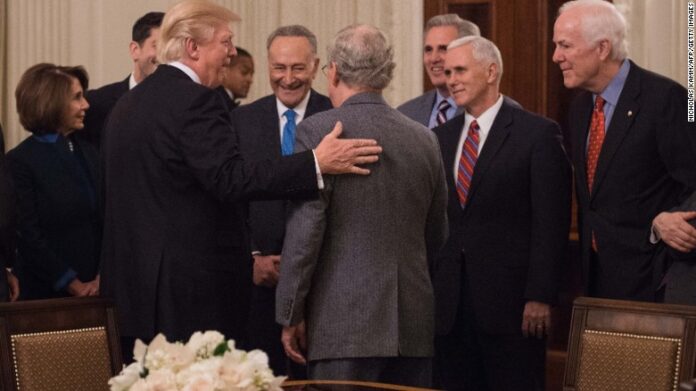 President Donald Trump is telling allies behind the scene that he knows he lost the November 3rd election to Joe Biden, while publicly claiming election fraud.

CNN reports that Trump told an ally he is delaying the transition process and is aggressively trying to sow doubt about the election results in order to get back at Democrats for questioning the legitimacy of his own election in 2016, especially with the Russia investigation.

Democrats didn’t find sufficient evidence to impeach Trump, but that chance came on December 18th 2019 when they approved articles of impeachment on charges of abuse of power and obstruction of Congress.

Trump’s impeachment came after a formal House inquiry alleged that he had solicited foreign interference in the 2020 US presidential election to help his re-election bid, and then obstructed the inquiry itself by telling his administration officials to ignore subpoenas for documents and testimony.

Republican controlled Senate acquitted Trump of the charges on February 5, 2020 to save his presidency.

Trump’s refusal to concede defeat to Biden also stems in part from his perceived grievance that Hillary Clinton and former President Barack Obama undermined his own presidency by saying Russia interfered in the 2016 election and could have impacted the outcome.

The president still holds a grudge against Democrats for what he claims as undercutting his 2016 election win by pointing to Russian interference efforts.

Trump has suggested to his allies that it is fair game to not recognize Biden as the President-elect in retaliation.

This is particularly peculiar because Hillary Clinton conceded defeat on election night in 2016, and Obama initiated Trump’s transition immediately.

CNN further reports that Trump’s allies have been pleading with him to at least let Biden’s transition begin, even if he doesn’t want to concede defeat.

Related: Joe Biden: I Promise You The Military Will Escort Donald Trump Out of White House With Great Dispatch