Tony Gachoka exposed after refusing to pay for nunu 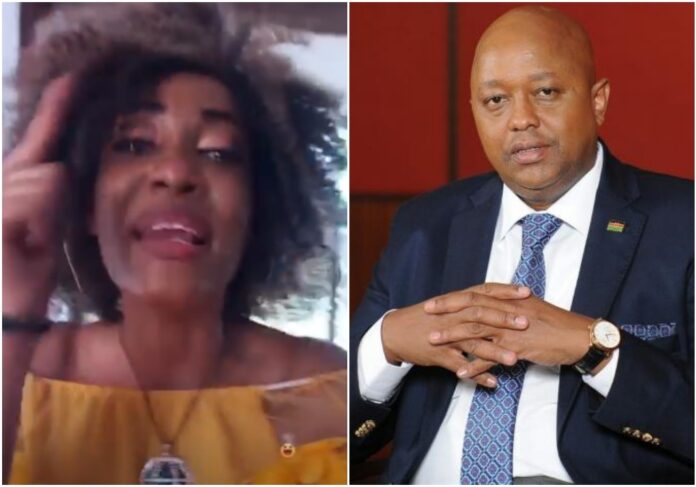 Tony Gachoka is on the hot seat again and this time around, the lady exposing him isn’t afraid of the backlash involved by exposing the media personality.

Tony Gachoka who also answers to his acronym; TG has been exposed by one lady on social media who was furious over Tony’s behavior of breaking her back with numerous Kamasutra positions only to be kicked away from his house by his servants.

The lady in question went ahead on Facebook Live telling how she turned down a job position because Tony Gachoka had promised her to pay her handsomely after lungula only to find out that Tony had lied to her.

Tony Gachoka who is seen on the video lying down comfortably on his chair wearing his pajamas not bothered by the ranting of the woman in question hasn’t responded to anything yet.

“This is unfair, this is not going to be the end of it,” she said in the video, “this is so unfair kama sipati haki yangu, kwani sina damu? mimi I work, I toss and turn in that f***** bedroom na saa hizi mtu anaambia mfanyi kazi achukue suitcases zangu,”

Allegedly Tony Gachoka threatened to call the police on her but the lady didn’t budge going on record daring Tony to go on ahead and call the police since she was already live on Facebook.

This isn’t the first time Tony Gachoka is in the mess similar to this one.

Twitter user Sharon Nduta — whose handle is @ShazieKe alleged that Tony Gachoka had attempted to grope her breasts when she and her colleague visited the media personality at his house in Nairobi back in late 2019.

“Working with Tony Gachoka is difficult. He is constantly on liquor and excited. [He] has no respect for professionalism and privacy. He tried to grab my boobs at his house in [the] presence of @iamlegitdaily and @_mmjosh. I will expose [Gachoka] soon,” wrote Nduta on Twitter at 8:35 am Tuesday, March 10.

“I am a single man who happily enjoys his life when I am not working, with no apologies. So, honestly, this [Nduta’s] storyline, and saying that I like my drink, doesn’t bother me, [even] one bit. I met bloggers [Nduta and her colleagues] for a meeting [and] nothing else. I have never met them again,” said Gachoka on Twitter.