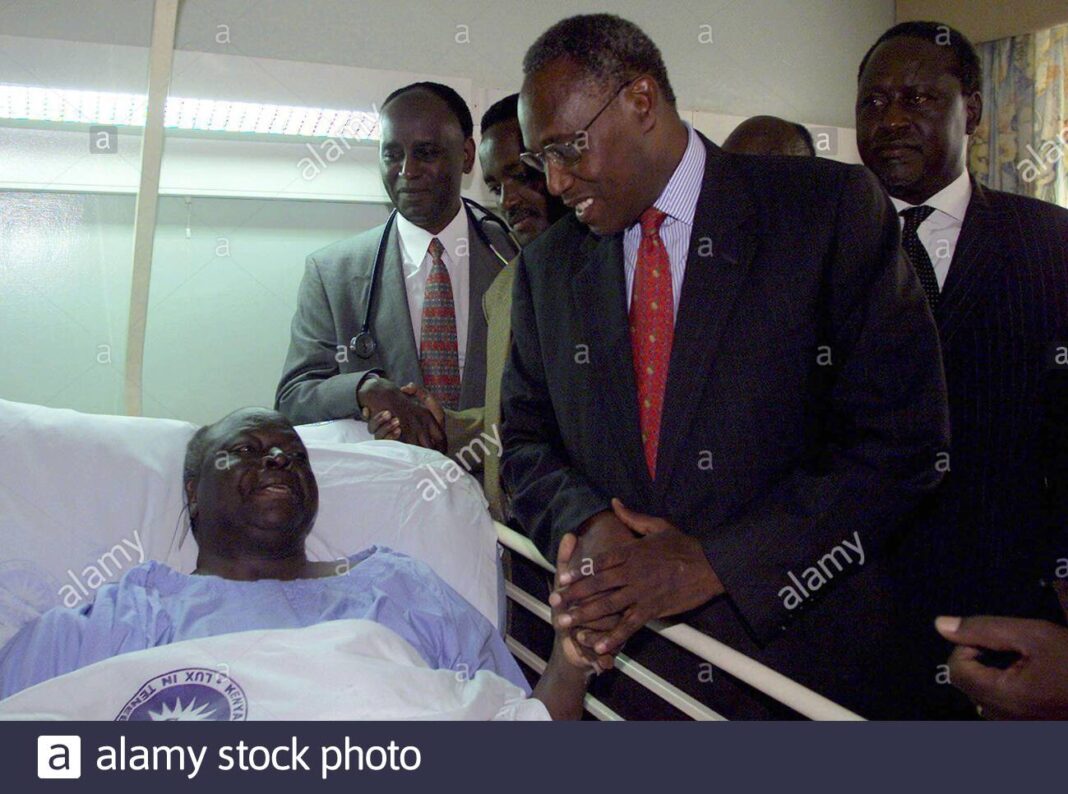 On 3rd December 2002, Mwai Kibaki was involved in a grisly road accident just three weeks to the general election. Raila Odinga moved mountains to protect Kibaki amid fear that Moi regime would do something nasty.

Kibaki was involved in an accident at Machakos junction on his way back to Nairobi from a campaign meeting in Ukambani.

Kibaki was traveling in a convoy of at least three vehicles, his car was ahead followed by former Kitui senator David Musila then another car carrying Raila.

The Range Rover KAH 016G carrying Kibaki collided with a matatu while trying to avoid hitting three pedestrians, it lost control and rolled at least three times before ending up in a ditch.

Kibaki was subsequently hospitalized in Nairobi before he was flown to London as a security precaution as the opposition didn’t trust president Moi’s government.

Recalling the events of December 2nd 2002, political analyst Mutahi Ngunyi said it was Raila who drove Kibaki in an ambulance as he didn’t trust the driver.

“What Dr Gikonyo did NOT say in this interview was that Raila did not TRUST the AMBULANCE driver that took Kibaki to HOSPITAL after the Machakos Accident. Raila DROVE the AMBULANCE himself. FACT of HISTORY,” Mutahi tweeted.

What Dr Gikonyo did NOT say in this interview was that Raila did not TRUST the AMBULANCE driver that took Kibaki to HOSPITAL after the Machakos Accident. Raila DROVE the AMBULANCE himself. FACT of HISTORY. https://t.co/UzE3tjcKvz

Mutahi was commenting on a KTN video in which  Dr. Dan Gikonyo was speaking on the events involving Kibaki accident.

Dr. Gikonyo is a cardiologist and a family doctor to the Kibakis. The doctor also narrated how Raila stopped Kenya Airways from airlifting Kibaki to London at the back of a plane.

“The difficult bit was the flight to England. We are here with a very important client who is injured and we have to travel with him to England and we didn’t have our own control. You know when you are not the president you can’t say how to travel. I remember asking for some seats in Kenya Airways and Kenya Airways people I must say they were not very cooperative. You remember we still had an old government and we are the new government challenging the old government.

“They were not very cooperative, they gave us three seats at the back of the plane. And I remember honorable Raila Odinga was with us in that movement. And he said ‘no we cannot put our president in the back of a plane. We must put him in first class. Kenya Airways demanded that if he gonna go to first class we must pay and I remember all these was done by Raila Odinga. He was there and he said ‘we are going to pay we are going to pay and we must get seats on the front of the plane’.

“The difficult thing was how to get a stretcher onto the front of the plane. The aisle is not wide enough to carry a stretcher and I still remember… I have a strong respect for Raila… He came with some young men about eight or nine of them and they carried that stretcher across that aisle to front on their knees. They bend on their knees they carried the stretcher up on their hands and on their knees they went from the entrance to the front seat of the plane to place the oncoming president on a comfortable position in first class and then we traveled to England,” Dr. Gikonyo narrated.

Related: Raila Attends Birthday Of Githunguri Man Who Picked His Number Online And Texted To Invite Him To His Party