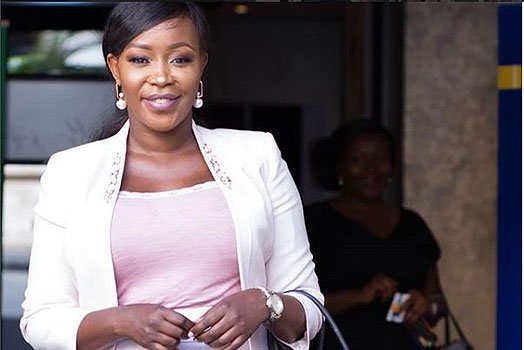 Former Citizen TV business presenter Terry Anne Chebet has revealed that she almost hired a man who had been stalking her in social media.

Terry Anne said that the young man missed an opportunity to work with her after she discovered that he had been sending her suggestive messages in her DMs.

Through her twitter account, the media personality said that the man, whose identity was withheld, send her a message requesting to be hired.

“Hello Terryanne. I loved your conversation with Benard Ndong on Instagram Live. I’m an IT diploma graduate, digital manager and content creator and I would love to work for you. I don’t mind starting as an intern,” the young man said.

In response, Terry Anne asked the man to send her his CV which impressed her so much to the extent of considering him for an interview.

She proceeded to do a background check on her candidate only for her to meet with the disrespectful messages.

“I’m all about shooting your shot, but not when you’re actively job hunting. Got an inbox, good candidate, mailed him to book an interview, only to scroll up on IG to see messages he’d been sending me, which I hadn’t seen,” read a screen short that Terry Anne shared.

“Im Honestly in love with you”, read another screenshot

“I like you Terry Anne but talk of snubbing someone, you have mastered it,” the young man proceeded in trying his luck with the journalist.

She withdrew her interest in the man after going throw the message even though he was a good candidate.

“He totally qualified for the position, I was looking forward to the interview, but I can’t hire him based on the sentiments shared,” she said.

She however revealed that she was going to link him with another employer since she could not work with him.

RELATED STORY: Lovestruck Lillian Ng’ang’a Takes To Social Media To Pour Out Her Heart To Juliani