Supreme Court Justices Tear Into Each Other In Blistering Opinion 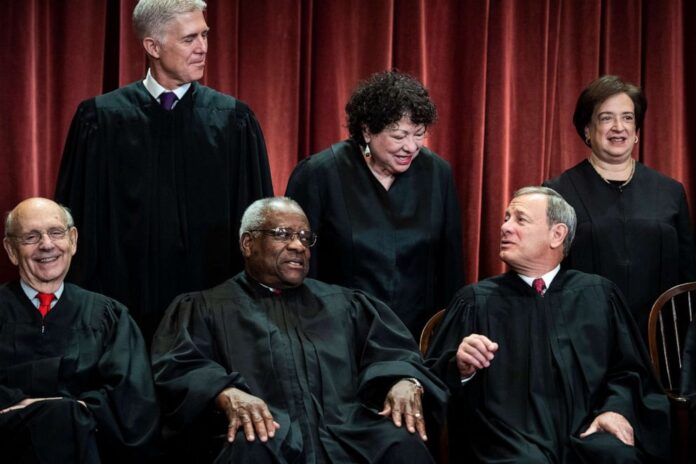 The Supreme Court’s rejection of New York’s pandemic limits on religious services exposed personal fissures among the nine justices and offered the starkest rendering yet of President Donald Trump’s impact on the bench.

The dueling sides of the 5-4 cases handed down late Wednesday took issue with each other’s legal rationales. But they also engaged in personal recriminations that laid bare shifting power dynamics and deep ideological differences, particularly when it comes to religion.

The three newest justices, all in the majority, played leading roles. Trump’s first appointee, Justice Neil Gorsuch, penned an especially caustic opinion deriding Chief Justice John Roberts and the three liberal dissenters for their arguments that would have prevented the court from intervening in the paired New York disputes.

“(W)e may not shelter in place when the Constitution is under attack,” Gorsuch asserted in a solo concurring opinion. “Things never go well when we do.”

Trump’s third appointee, Amy Coney Barrett, made the greatest difference. Her vote ensured that the justices spurned the high court’s recent decisions in California and Nevada cases, when the majority had deferred to state officials trying to fight Covid-19 with occupancy limits on churches and synagogues.

Joining the three Trump appointees in the majority were Justices Clarence Thomas and Samuel Alito.

Their writings, particularly Gorsuch’s, drew battlelines reminiscent of an Alito speech earlier this month asserting that religious liberty was under assault. Striking chords similar to Trump’s anti-mask, anti-restriction rhetoric, Alito had declared to the Federalist Society, “The pandemic has resulted in previously unimaginable restrictions on individual liberty.”

Separately, liberal Justice Sonia Sotomayor in her dissenting statement recalled the contentious Muslim travel ban case of 2018, suggesting the conservatives employed a double-standard to side with Trump then but against New York Gov. Andrew Cuomo now.

In the opinions released just before midnight late Wednesday, the majority accepted arguments from the Roman Catholic Diocese of Brooklyn and Agudath Israel of America and prevented Cuomo from enforcing 10- and 25-person occupancy limits on certain churches and synagogues.

The majority rejected the governor’s arguments that the prior “red zone” and “orange zone” restrictions no longer applied to the churches and synagogues. The majority said there was no guarantee that those zone classifications, and related occupancy limits, would not be reimposed.

In declaring that the restrictions likely violate the First Amendment’s guarantee of free exercise of religion, the majority said in its main opinion, which was unsigned, “Not only is there no evidence that the applicants have contributed to the spread of COVID-19 but there are many other less restrictive rules that could be adopted to minimize the risk to those attending religious services. Among other things, the maximum attendance at a religious service could be tied to the size of the church or synagogue.”

With the September 18 death of prominent liberal Ginsburg and succession of Barrett, a proven conservative, America’s high court is on the cusp of a momentous change. There is a 6-3, conservative-liberal, majority.

Roberts resides on the conservative wing, but until Ginsburg’s death he was also at the ideological middle of the nine-member bench and could exercise a steadying, institutionalist hand. He held the decisive fifth vote in countless cases.

But as this week’s religion cases showed, his centrist-conservative tendencies could now regularly relegate him to the dissent.

There are likely to be exceptions when Roberts, a 2005 appointee of George W. Bush, would be comfortably on the right. But Roberts had already staked out a middle-ground position on pandemic occupancy limits. He cast the key vote in the California and Nevada cases, with the four liberals then on the bench, to defer to local governmental restrictions.

In the May 29 California case, South Bay United Pentecostal Church v. Newsom, Roberts had written, “The precise question of when restrictions on particular social activities should be lifted during the pandemic is a dynamic and fact-intensive matter subject to reasonable disagreement. Our Constitution principally entrusts the safety and the health of the people to the politically accountable officials of the States to guard and protect.”

Roberts quoted in that statement in 1905 decision, Jacobson v. Massachusetts, that upheld state power during a smallpox outbreak.

On Wednesday, Gorsuch excoriated Roberts’ concurring opinion in the May California dispute for its use of Jacobson v. Massachusetts. “(T)hat (Roberts) opinion was mistaken from the start,” Gorsuch wrote. “To justify its result, the concurrence reached back 100 years …. But Jacobson hardly supports cutting the Constitution loose during a pandemic.”

Gorsuch said a public health situation more than a century ago and evolving understandings of constitutional guarantees undermine the relevance of the case. Gorsuch then went further in Roman Catholic Diocese of Brooklyn v. Cuomo and triggered a testy exchange.

He declared that Roberts was now suggesting that he “never really relied in significant measure on” Jacobson when, as Gorsuch asserted, “That was the first case South Bay cited on the substantive legal question before the Court, it was the only case cited involving a pandemic, and many lower courts quite understandably read its invocation as inviting them to slacken their enforcement of constitutional liberties while COVID lingers.”

The chief justice did not let that pass.

Referring to the Gorsuch’s concurring opinion in the New York case, Roberts wrote, “One solo concurrence today takes aim at my concurring opinion in South Bay.” Roberts then repeated Gorsuch’s criticism, including his claim that Roberts presumably had “mistaken this Court’s modest decision in Jacobson for a towering authority that overshadows the Constitution during a pandemic.”

Roberts threw it back at Gorsuch, observing that Gorsuch’s discussion of the 1905 case “occupies three pages” of his writing, while Roberts himself gave it “exactly one sentence in South Bay. … It is not clear which part of this lone quotation (from Jacobson) today’s concurrence finds so discomfiting.”

And so it went.

Gorsuch also rejected Breyer’s view, in an opinion that was signed by Sotomayor and Kagan, that if new occupancy limits are imposed, the parties could refile their claim. Rejoined Gorsuch: “But none of us are rabbis wondering whether future services will be disrupted as the High Holy Days were, or priests preparing for Christmas.”

Sotomayor wrote a separate dissent, joined by Kagan, directed largely at Gorsuch. She noted that he offered examples of secular activities that could be as risky as religious gatherings yet were not subject to the same occupancy limits.

“But Justice Gorsuch does not even try to square his examples with the conditions medical experts tell us facilitate the spread of COVID-19: large groups of people gathering, speaking, and singing in close proximity indoors for extended periods of time,” Sotomayor wrote.

Then she warned: “Justices of this Court play a deadly game in second guessing the expert judgment of health officials about the environments in which a contagious virus, now infecting a million Americans each week, spreads most easily.”

In the end, Sotomayor invoked the 2018 case in which the conservative majority — over a dissent from Sotomayor and other liberals — upheld the Trump travel ban that applied to several majority-Muslim countries.

In Wednesday’s case, the fivesome on the right wing had written that the New York restrictions “single out houses of worship for especially harsh treatment,” in contrast to the Trump’s travel ban, which the court two years ago had deemed “neutral.”

Sotomayor noted that the Roman Catholic Diocese had argued that certain statements made by Cuomo reinforced its arguments that he had impermissibly targeted religious activity. Cuomo had rejected that characterization, as did Sotomayor as she said the court should not apply the toughest constitutional scrutiny to the New York occupancy limits.

“Just a few Terms ago, this Court declined to apply heightened scrutiny to a Presidential Proclamation limiting immigration from Muslim-majority countries, even though President Trump had described the Proclamation as a ‘Muslim Ban,’ originally conceived of as a ‘total and complete shutdown of Muslims entering the United States until our country’s representatives can figure out what is going on.’

Concluded Sotomayor: “If the President’s statements did not show ‘that the challenged restrictions violate the ‘minimum requirement of neutrality’ to religion, it is hard to see how Governor Cuomo’s do.”