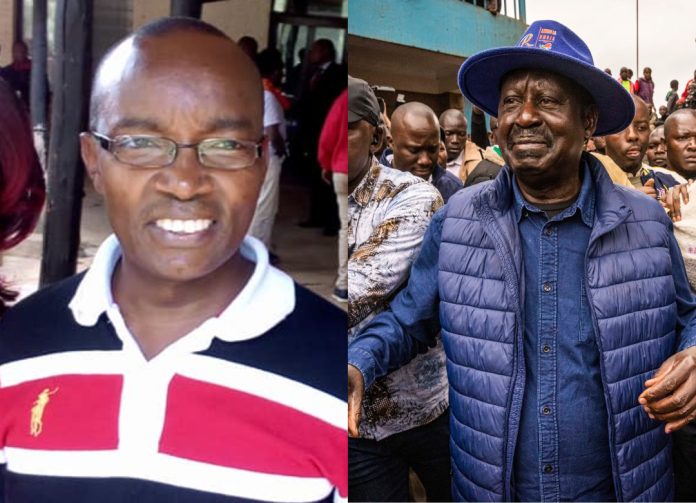 Wahome Thuku is a Kenyan High Court attorney, a teacher, a writer, a blogger, and a political analyst.

In his post Wahome Thuku says Kenyans wake up and rise for whatever they want done. He says,

“DON’T keep singing ati Raila alete watoto wake wafanye maandamano kwanza
That is a very very very old line. It’s a dividing line which is over 100 yrs old.
Even Moi used to tell kina Orengo and Muite the same thing, walete watoto wao streets.
We have told Raila the same thing for decades. That divide and rule cliche does not stop people from demonstrating. Infact it boldens them.
The children of MauMau did not go to the forest with their fathers that’s why they are in government today.
The children of Kenneth Matiba were in the UK when he was busy fighting Moi and we still fought.
The children of Nelson Mandela did not go with him to prison.
Get the drift.
That little old line “bring your children” “oh his children are earning”…bla bla…is so tired and lazy, it doesn’t distract anyone. His children are above 18, they can make their choices.”

After President William Ruto ordered the suspension of the famous Cherera 4 IEBC Commissioners, Raila Odinga has called for reactive measures which include demos and a separate Jamhuri Day celebration to counter the government.

As usual, Kenyans online are asking the Azimio la Umoja leader to make sure, his children are at the fore when the demos begin; in preparation for whatever the government will do.

As we speak, In the recently completed election for Kenya’s representatives to the East Africa Legislative Assembly, Raila Odinga’s daughter Winnie Odinga was named the winner.