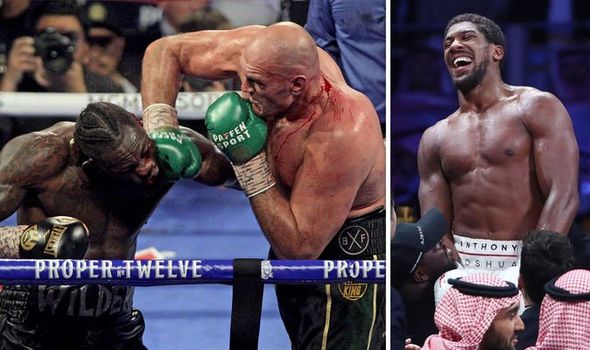 Tyson Fury and Deontay Wilder first locked horns on December 1st 2018 at the Staples Center in Los Angeles, California. The boxing match ended in a draw.

Fury however won the rematch on February 22nd 2020, at the MGM Grand Garden Arena in Las Vegas, Nevada.

Tyson earned an emphatic TKO (Technical Knockout) in Las Vegas to more or less wrap up their rivalry.

Wilder has recently come out accusing Tyson Fury of foul play, and his comments have made heads turn.

The American boxer alleges that his British counterpart padded his gloves with egg weight and also went as far as to accuse his own trainer of poisoning his water.

Wilder’s accusations came months after he justified his loss by claiming that his walk-out costume was too heavy.

Anthony Joshua has since come out to slam a sore lose Wilder. The celebrated British boxer said Wilder will only tarnish his reputation if he keeps on making baseless claims over his defeat to Fury.

“How he feels today might change in a year or two years due to experiences or more understanding of the situation that he has gone through. He was knocking everybody out and got used to a winning performance. He took a loss and isn’t used to it. As time goes on, he may express himself differently. Today? In my humble opinion, it isn’t coming across in the right way,” said Antony Joshua during an interview with Sky Sport.

Anthony Joshua also taunted Wilder for chickening out of a fight with him. The American boxer said that he was offered to fight Joshua for more money, but turned it down to fight Fury.

“The positive out of it? He told the world that he ducked and dodged me. We offered him a fight for the undisputed championship of the world, and he went down the route of fighting Fury. I’m glad we can clear that up and move on,” said Joshua.

Related: Mike Tyson Returns To The Ring 15 Years After Retirement To Lock Horns With Roy Jones Jr. In The Biggest Fight Of 2020