Sibling Rivalry: List Of Kenyan Sibling Politicians That Have Faced Off Each Other In Struggle For Power

Several politicians in the country are siblings but they have found themselves in different political affiliations especially now that political temperatures are rising.

This has raised the question of whether the political rivalry has an impact on their family relations because it is very clear how politics get ugly sometimes.

However, it is said that politics is just a game of numbers and what we see among politicians in public is not what happens behind the curtains.

It is believed that politicians are the greatest of friends despite their political affiliations. Today we have a look at politicians who are siblings but have different  ‘opinions’ when it comes to matters of politics.

Wetang’ula is Ford Kenya’s party leader and the current senator for Bungoma County.  He has been in politics for a longtime. In 2003, he was elected as the MP for Sirisia constituency, a position he held till 2013 when he decided to vie for the senatorial position.

On the other hand, his younger brother Tim, who is the MP of Westlands since 2013, has been a member of ODM, which is part of the  Azimio la Umoja.

Azimio coalition is the main competitor of Kenya Kwanza in the August 9 general elections.

In 2017, Kithure was for Jubilee while Isiah Kindiki was supporting NASA, whose flag bearer was Raila Odinga. Isiah was NASA’s campaign coordinator in Tharaka Nithi and its environs.

Kithure, now a staunch supporter of DP William Ruto has once again been pitted against Isiah who was recently appointed as Raila’s deputy chief agent, just a day after Ruto named Kithure his chief agent.

Andrew, Julius and Charles Sunkuli are another group of sibling politicians that have never shied from becoming political opponents.

In 2013, Andrew who had been recently selected as Kalonzo Musyoka’s running mate before their mission was aborted, ran for the Narok Senatorial seat as an Independent candidate against his Julius who vied under a TNA ticket and Stephen Ntutu(who won the elections) of URP.

Last year, Andrew and Charles both expressed interests on the Narok gubernatorial seat and it took the intervention of elders for them to abandon their quests.

Sunkuli was then named Wiper party candidate for the senatorial seat earlier before May 16 when Kalonzo announced him as his running mate.

Julius on the other hand is seeking to make a comeback in politics as an MP for Kilgoris after a 20-year hiatus. He was an MP for the constituency between 1992 and 2002 before he was ousted by the current MP. Julius, the eldest, worked in the late Daniel Arap Moi’s regime as the internal security and defense minister.

Charles  has served as a permanent secretary in three ministries and is currently the Principal Secretary in charge of youth affairs in the ICT ministry.

The politicians are in different but rival coalitions. Kuria is vying for the Kiambu gubernatorial seat on a Chama Cha Kazi ticket that is supporting Kenya Kwanza Alliance. On the other hand, Aloise is in Jubilee, which is under Azimio.

Initially Aloise intended to vie for Juja parliamentary seat on CCK ticket but fell out with the party and defected to Jubilee. 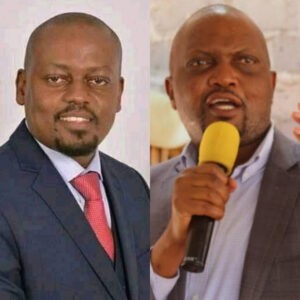 RELATED STORY:You Favourite Politicians That Might Miss On The Ballot In August 9 Elections