Shocking Decision Oscar Sudi Made To Secure His Freedom 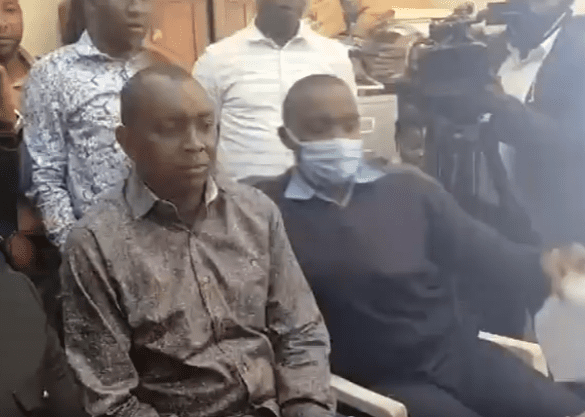 To secure his freedom outspoken Kapseret MP, Oscar Sudi had to promise the High Court that he will not utter any words before the investigations are completed.

Oscar Sudi who appeared on Friday before Justice Joel Ngugi for the inter parte hearing of his review application decided of not making any inciteful utterances before the completion of the investigations.

Sudi who appeared before the court wanted the decision to lock him up at the Nakuru Police Station for seven more days be reviewed.

Sudi was taken into custody last Sunday but was released after Ngugi delivered a ruling on his revision application.

The MP moved to the high court on Thursday to protest his seven-day detention.

He requested the high court judge to release him on a reasonable bail term.

Sudi’s defense team led by Lawyer Nelson Havi argued that there were no grounds to further detain him.

Havi urged the court to release the MP on a free bond.

On the other side, the prosecution insisted that the MP has a great influence ‘on the ground’ and would tamper with the investigations.

The prosecution urged the court to impose tougher conditions in the event Sudi was released on bond specifically hindering him from making an inciting statement.

Previously, the Magistrate court ordered Sudi’s detention until next week Wednesday citing that his custody would ensure public order, peace, and security.

However, Sudi said his detention was unconstitutional and a denial of his fundamental rights to liberty and fair hearing.

Sudi argued that the lower court had assumed him guilty over his utterances that are alleged to have amounted to hate speech even before he was charged.

Sudi has been granted a cash bail of Sh500,000 with an alternative bond of Sh1 million.

The High Court Judge dismissed all the grounds used by the prosecution in seeking further detention of the MP.

Justice Ngugi term the application before the lower court as radical, saying there was no reason to hold the MP for 11 days pre-charge.

“His liberty is paramount so no justification to continue holding him. The State must convince the court that it is acting in good faith in holding the suspect,” Ngugi said.

Related: MP Oscar Sudi has been released under strict conditions

Celibacy Before The Ring Does Not Guarantee A Thing