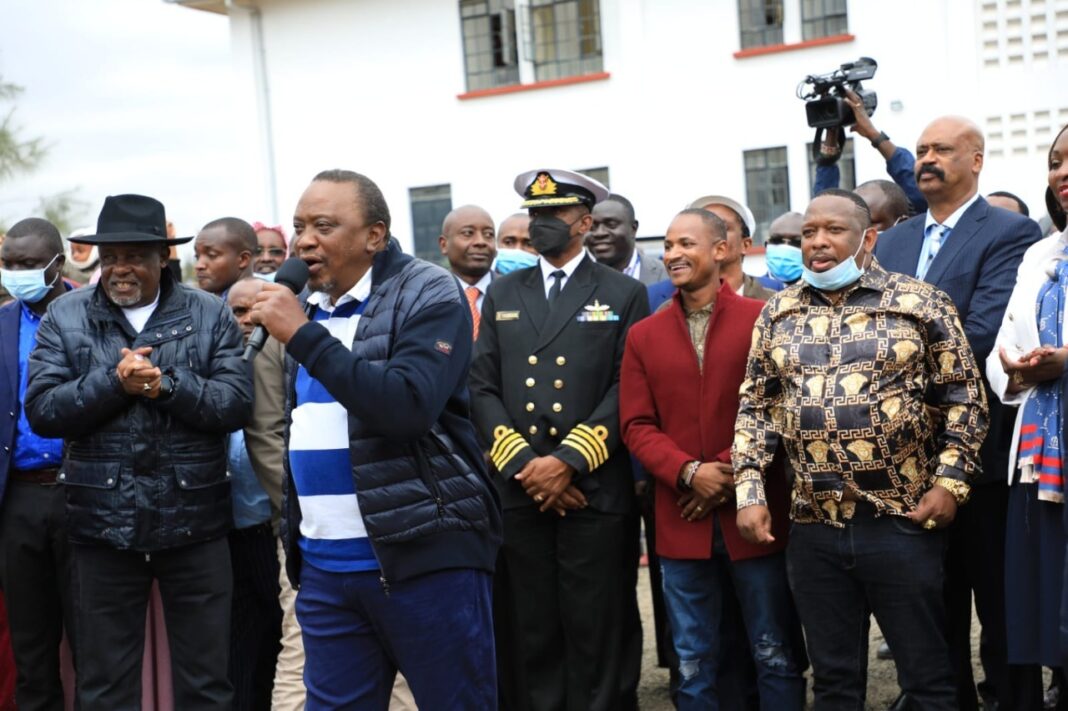 President Uhuru Kenyatta, Mike Sonko and Babu Owino have left Kenyans talking after they campaigned together  for Azimio la Umoja in Embakasi East on Tuesday.

The trio visited the Nairobi Metropolitan Service projects in the constituency and used the chance to drum up support for Raila Odinga, Martha Karua and Polycarp Igathe who is vying for the Nairobi gubernatorial seat on a Jubilee ticket.

An excited Sonko praised Uhuru Kenyatta even though previously he had been bitter at him following his impeachment.

“I am the real hustler, the other one is fake. I would first want to thank President Uhuru Kenyatta. For the short time that I have been away, I have seen the president work. He has taken care of the needs of Nairobians and Kenyans in general. For what the president has done to continue you have to give(victory) to him and his people. NMS should continue working for Nairobi . Give the president  an MCA, MP, Governor and president from Azimio,” the former Nairobi governor said.

Many concluded that Sonko will now be on the ballot for Mombasa gubernatorial race following the Tuesday show and that has actually come to pass when the Mombasa High Court ruled in his favor, directing IEBC to clear him for the race.

Sonko and president Uhuru Kenyatta had not been seeing each other eye to eye since his impeachment as Nairobi governor and for them to be seen together like that, something was actually up.

Aside from that, the head of state also must have reached out to Sonko so that he can help him campaign for Polycarp Igathe who is likely to be defeated by Kenya Kwanza’ s Johnson Sakaja judging from opinion polls. Sonko is influential in his own manner in Nairobi.

Furthermore, President Kenyatta was endorsing NMS, whose services are supposed to be halted after the on coming general elections. The function was an NMS one and in his speech, Sonko advocated for NMS to continue serving Nairobi because of the great work it had done.

Their appearance also served as a communication that Sonko is fully in Azimio and Kenya Kwanza has no chance of winning his support. He will now be drumming support for the coalition. Sonko appeals to certain groups of people including the youth and the poor especially because of his generous acts.