More
HomeNewsRigathi Gachagua Dragged Into The Issue Of Two Touts Hanging Dangerously On... 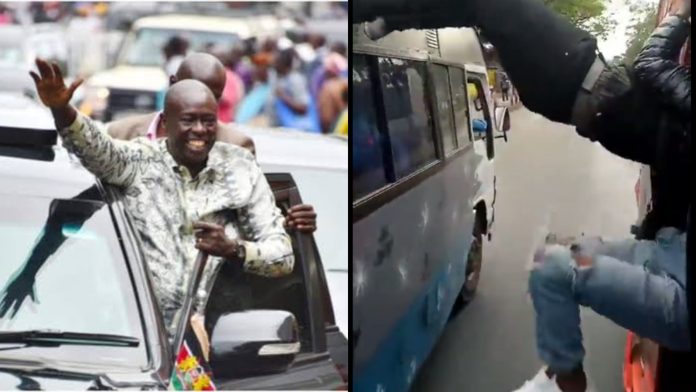 Narok senator Ledama Ole Kina has faulted NTSA’s move to arrest the two touts that were captured hanging dangerously on a moving matatu.

Ledama accused NTSA of double standards since Deputy President Rigathi Gachagua was recently spotted ‘pulling a similar stand’ yet no action was taken against him.

“Now tell me my good friends @ntsa_kenya why should you arrest a Matatu Driver and two Conductors for hanging on a moving Matatu yet they learnt from the second in Command Mr. Riggy G himself @rigathi?? Stop your double standards men! Cut them some slack!” the senator said.

Gachagua was spotted hanging on a car’s door after attending the 94th music festival in Kisumu days ago. The incident occurred when his  motorcade was headed for the Kisumu International Airport. In a video shared online, Gachagua  waved and greeted locals with one hand as the other firmly held onto the car. His aide could be seen holding Gachagua’s  door from the back so that he would not fall.

NTSA announced that the touts alongside the Ummoiner sacco matatu driver had been arrested and will be charged accordingly in a statement released on Monday morning.

“The driver & the two conductors have been arrested. They will be charged accordingly. We urge all road users to remain vigilant & speak out against such behavior. Road Safety is a shared responsibility & we thank the public for reporting this incident,” the authority said.