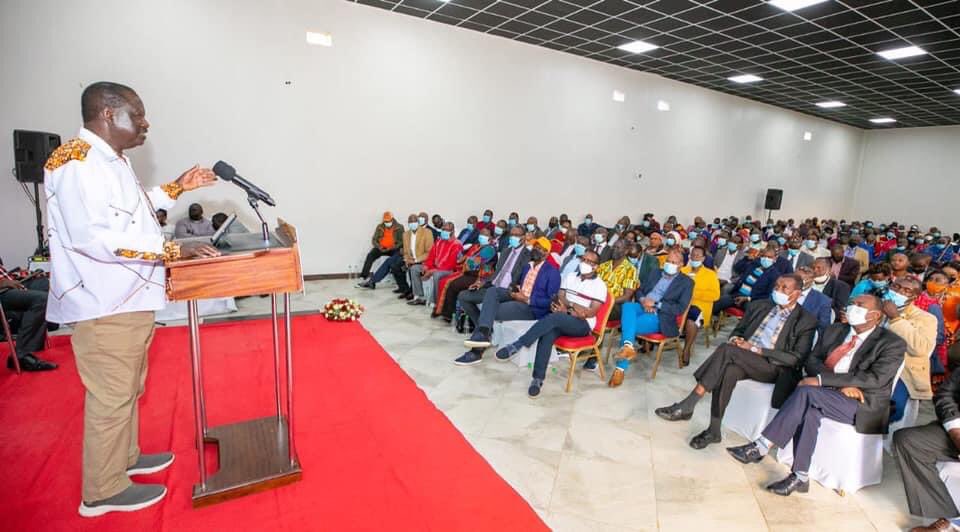 All major candidates have announced their bid for 2022 presidential election except for Raila Odinga who has since revealed why he is yet to do so.

Raila has shown signs that he will vie for president in 2022 but he is yet to officially announce his candidature.

The ODM leader explained why he is yet to announce his presidential bid during a meeting with Maasai leaders in Kajiado county.

Speaking during Azimio La Umoja conference as part of his continued engagement with various communities, Raila made it clear that he will only declare his presidential bid after confirming that his voters have been registered for ID’s and voter’s cards.

“I cannot vie if my people have not registered for ID’S and voter’s cards. I will first gauge the number of people who are registered before I make an announcement on the presidential race,” Raila stated.

In unison, the Maa community has thrown their weight behind the #AzimioLaUmoja aspiration and has added pertinent issues dear to them to the list of things we intend to fix moving on.

I thank them for the warm welcome today and want to reiterate that #INAWEZEKANA pic.twitter.com/84wkW0kozQ

Raila has reiterated that he has mastered all the ways to maneuver through the political journey thanks to the knowledge he gathered during his political course.

The former Prime Minister will however first battled it out with Mombasa governor Hassan Joho, Kakamega governor Wycliffe Oparanya and billionaire Jimmy Wanjigi for ODM ticket in the forthcoming nominations.

Raila is poised to win the nominations given that he still remains the favorite among ODM delegates who will cast their votes to decide who the party’s presidential candidate will be.

After the party nomination it will be a tough campaign period, Raila’s strongest opponent is deputy president William Ruto who is set to contest the presidency on UDA ticket.

Raila and Ruto are the frontrunners and it’s strongly believed one of the two men will be Kenya’s fifth president.

Kalonzo Musyoka, Musalia Mudavadi, Uhuru Kenyatta will be the kingmakers in 2022, whoever they choose to support will definitely make it to State House.