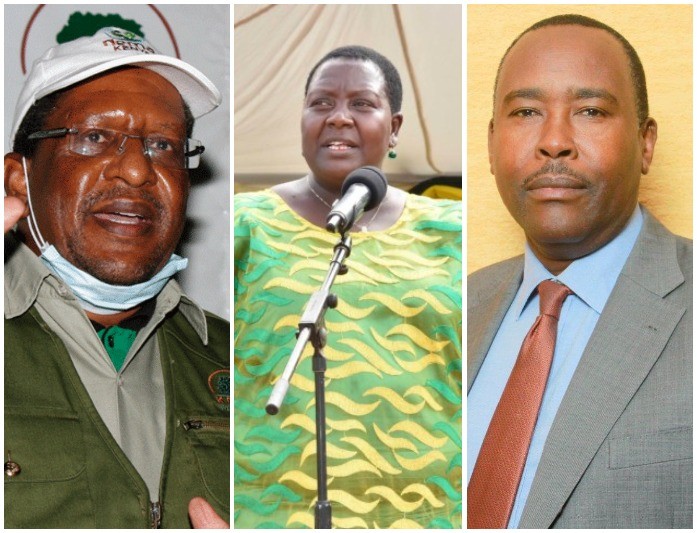 Political allegiance to Raila and Ruto has put the Tobiko family at a crossroads given that the Environment CS and Ole Suuji are Raila’s supporters while Kajiado East MP is now supporting Ruto.

Drama unfolded on Friday October 8th when Ole Suuji tried to block his wife from hosting Ruto at their Iloprosat home in Kajiado county.

Ole Suuji told off the DP for holding a political meeting in his home without his consent, stirring drama that involved the police and political leaders.

Clearly agitated, Ole Suuji accused Ruto of working in cahoots with his wife to have a political rally at his Ilporosat family home without informing him.

“They have invaded my matrimonial home in Ilpolosat without my knowledge. They have destroyed crops and slaughtered my family’s animals,” Suuji grumbled.

He said that he arrived at the home on Thursday night only to find dozens of people preparing for the meeting.

“To my shock I found tents already pitched and intruders preparing food ready for the political rally. I asked them to leave but they refused. They seemingly had been poisoned against me,” said Ole Suuji.

Peris Tobiko’s husband said he was forced to leave his house on Thursday night out of fear of being roughed up by people who invaded his home.

Ole Suuji sought help from the help of police to disperse the invaders in his home but he was told they couldn’t help as they had secured a permit for the function and that it was too late to disrupt the meeting as it would cause more tension.

Ole Suuji said being a government officer, he would not have allowed a meeting of such nature to take place at his family home. He is a commissioner at the Commission for Revenue Allocation (CRA).

Peris Tobiko’s husband is an adherent supporter of Raila Odinga’s bid for the presidency. He said he would sue Ruto and his wife for the invasion in his home.

Ruto arrived at Ole Suuji’s homestead at 1pm flanked by several MPs, and Ms Tobiko sat pensively beside him. When she rose to address the crowd, she never mentioned her husband.

The Kajiado East MP defected to UDA on Friday and was being received by Ruto. She is eyeing the Kajiado governor’s seat.

About two weeks ago before she decamped to UDA, Ms Tobiko gave Raila an ultimatum to either stop being “obsessed” with Kajiado governor Joseph Ole Lenku or she would defect.

Even though he kept silent over the drama at Iloprosat home, Environment CS Keriako Tobiko is an unapologetic critic of Ruto and a big supporter of President Uhuru Kenyatta and Raila.

It remains to be seen what will come of the Tobiko family as the Environment CS and his brother-in-law Ole Suuji face off with the family’s black sheep Kajiado East MP Peris Tobiko.

Related: Ruto Comes To The Defence Of Kisumu Women Rep Who Was Abused By Duale