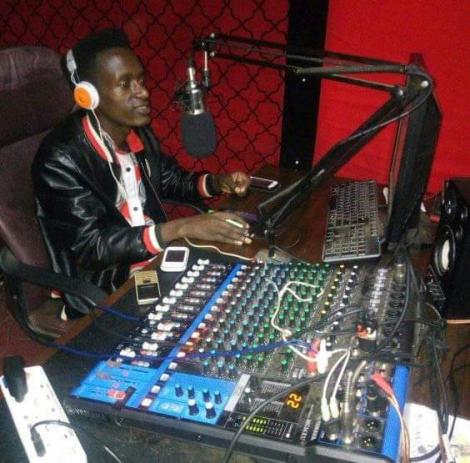 A radio host Peter Muthee has decided to put one his kidneys on sale in order to clear his debt amounting to ksh. 300,000.

Peter Muthee Kaindigo, popularly known as Professor wa Rhumba, was living a dream after securing a job at the Wendo FM.

His world was, however, turned upside down in November 2019 after the radio station suddenly closed shop due to debilitating financial constraints.

Left with nothing to hold onto, Muthee who graduated with a degree in journalism from Rongo University took up a job as a butcher at a village in Meru.

The transition wasn’t easy for a man who had to sit for Kenya Certificate of Secondary Education (KCSE) exams three times before securing a slot at the university.

“I landed a job as a presenter at a local Radio station in Meru after my graduation. I worked for a year drawing Ksh5,000 salary a month.

“The salary would be raised to Ksh 7,000 after 12 months of toiling and moiling. My heart sunk when the station was shut down due to financial constraints,” he explained.

But here he was, a butcher with limited expertise, and earning a paltry Ksh2,500 per month.

Muthee struggled to make ends meets, and with relatives who took him to the school demanding back their money, he resorted to borrowing to cater for his basic needs and clear the debts.

A short stint in farming offered no reprieve but instead saw him sink deeper into debt and depression.

“I borrowed a lot to survive. I had signed an agreement with some of my relatives to pay back the money they spent on my education once I finished University,” he added.

The Covid-19 pandemic that ravaged the economy did not spare Muthee as he continued to plunge into the deep pit of debts, a situation that led him to settle on one last thing that could free him; his kidney.

Muthee says he has been diligently scouring the market for a buyer to no avail.

The Rhumba lover says he landed a job at the start of November with Mwendantu FM, but despite securing the job, the huge debts are still weighing him down, which is why he is still plans to sell his kidney.