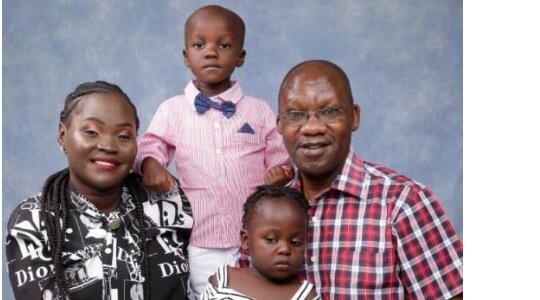 His family is adamant Dr. Gakara didn’t kill his two children and committed suicide as claimed by the police.

Gakara’s friend identified as Burton Njoroge questioned why police did not dust the door knobs of the second floor apartment for fingerprints when the bodies of the two children were discovered on Saturday September 18th.

Njoroge also called out police of failing to secure the crime scene, allowing people including relatives to access the house and even collect their personal belongs.

“The fact that the house has an automatic lock door that can be locked even from outside should have been the first indication that the police should have, aside from suspecting the doctor, thought of the possibility that someone else may have had a hand in the deaths,” said Njoroge, adding that several people had the key to the house.

Njoroge also lamented that police have not interrogated key people who were last seen with Dr. Gakara, and have also not extracted the CCTV footages from the apartments where the doctor lived.

Njoroge further asserted that Dr. Gakara did not show any signs of being disturbed or that he had intention to do anything wrong. He said that he spoke with his friend on Friday night and had dinner at his house.

During the dinner, Njoroge said that Dr. Gakara asked him for advice on his plan to extent his house.

“He even asked for a plan from me and I gave him. He was also upbeat about his wife’s education,” Njoroge said.

Njoroge also explained that Dr. Gakara wanted his wife Winnie Odhiambo to study so that she could help him at the clinic.

“That Saturday, when all these things happened, his wife had travelled to Nairobi to attend her classes at the Jomo Kenyatta University of Agriculture and Technology. In fact, they kept chatting on text till 1pm that Saturday,” Njoroge said.

56-year-old Gakara was married to another woman with who they had children – eldest being 20 – before he married Winnie Odhiambo. The first woman now lives abroad.

Postmortem hiccups also made the family question police’s motive. Police booked the Dr. Gakara as ‘Unknown Male Adult’ when they took him to hospital despite picking him from his house in the presence of his brother in law.

The fact that Dr. Gakara was booked as ‘Unknown Male Adult’ caused hiccups delaying his postmortem.

Gakara’s autopsy was scheduled to take place on Thursday morning. It was however postponed as the family and friends were still at the commissioner of oath’s office to swear an affidavit to confirm his identity as he was admitted as an “unknown male adult”.

The family was requested to produce documents from the lawyer to verify the identity. The hospital needed a sworn-in affidavit to allow the process to commence. However, the pathologist was also not available forcing the family to postpone the exercise.

The postmortem was ultimately conducted on Friday and it stated that Dr. Gakara died as a result of ingesting a substance that is suspected to be medicine.

More toxicology tests will be done to determine what exact medicine it was that caused the death of the doctor.