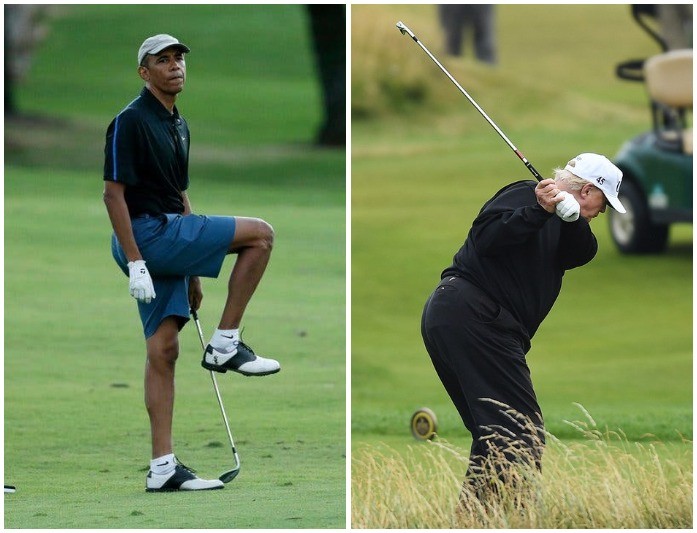 Barack Obama has revealed that Donald Trump not only cheats in elections but also in his favorite sport – golf.

The US 44th President talked about his successor cheating in golf during an interview on the Late Show with Stephen Colbert on Monday.

Obama acknowledged that Trump is indeed a good golf player but insisted that 45 is ‘unable to track his own score’.

Obama explained that Trump is always unable to count his own score, or cheats while playing golf.

“Listen, from what I understand, he’s actually a pretty good golfer. I understand that — shockingly enough — there’s sometimes problems with the scoring, and whether he’s keeping track of his score,” said Obama.

Asked whether or not he would reach out to Trump when he leaves the White House next month to play golf with him, Obama blatantly refused saying “I do not”.

Obama has previously taken part in the Presidents Cup tournament alongside both George W Bush and Bill Clinton, when all three former US President’s played three years ago.

Trump however declined to participate alongside his predecessors in the Presidents Cup, only showed-up at the tournament the next day.

44 further taunted 45 saying that he has a knack for cheating and making absurd claims, he made reference to Trump’s claims that late Venezuelan president Hugo Chavez had tampered with American vote machines.

Related: Trump Out Golfing As Joe Biden Is Announced President-elect