No More Tears! Why Jubilee Reinstated Bahati’s Nomination For Mathare MP Seat Despite Agreement With ODM 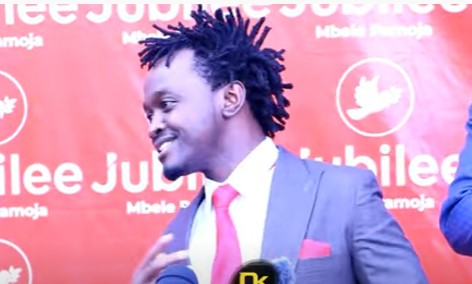 Singer Kevin Bahati Kioko’s tears have finally paid off since Jubilee has reinstated his nomination as the party’s candidate for Mathare MP seat race.

This was announced to the public by Jubilee secretary general Jeremiah Kioni and the artist during a press briefing at the ruling party’s headquarters in Nairobi.

Kioni said that Jubilee reinstated Bahati’s ticket because he is a youth  and the party has the interests of the youths at heart.

“He is a youth, we are happy to have had him with us  representing everything that you think of in this country in terms of even people who work hard from nowhere. You have an equal opportunity like any other person in this country and within Jubilee that is why we embrace him even if it was a little difficult elsewhere that is why we have him,” Kioni said while calling upon the youths to join the party and make use of the opportunities available.

Bahati was handed his nomination ticket afresh just weeks after shedding tears in a press conference where he revealed that he had been asked to step down even after winning fairly in Jubilee primaries because the Mathare  had been  zoned as an ODM area, as per the Azimio la Umoja agreement.

“There were a lot of issues but just to confirm that I have my ticket and am in the ballot with the Jubilee ticket and I can promise that I am the next MP Mathare. Thank you so much to my party Jubilee for the opportunity to run as a Member of Parliament,” Bahati said.

He went ahead to thank president Uhuru Kenyatta for giving an opportunity to Kenyan youths to be leaders as well as the ODM leader Raila Odinga.

“And also to thank Baba the fifth for considering a young person despite the fact that there were a lot of zoning issues ,” Bahati said.

RELATED STORY:“It Is Just By Law” Singer Bahati Gives A Candid Explanation Why He Chose Jubilee Over UDA