Rapper Juliani has broken his silence over a trending photo that pitted him against former Machakos governor Alfred Mutua.

The photo showed Mutua posing in New York with his suitcase, where he had gone for the United Nations General Assembly while Juliani posed alongside his baby..

The caption read, “If my mom makes such a mistake then I suffer later, we can clash badly because I had the chance to be born with a silver spoon but her ‘sexual urges’ took her to a bhang smoker in Dandora.” 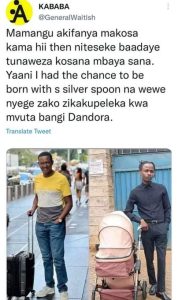 Several memes about the same also surfaced with most claiming that Juliani was a struggling musician.

Flowing with the jokes, Juliani urged Kenyans to send him money so that he can buy diapers for his son. He accompanied his message with a throwback photo, probably when he was still struggling with life.

He however proceeded to the comments section and asked his followers not to fall for the trick.

“Please treat this message with contempt like the rest that keeps coming your way. Never believe what’s online,” he said.

Some of his followers however might have fallen for the trick as they ended up sharing messages of their contributions channeled to the pay bill number that he had shared.

On Tuesday, Juliani’s wife Lilian Ng’ang’a also responded to the viral photo saying, “Just seen some shallow story that y’all trying to drag me into. Truly you don’t get tired. Just continue. Let me proceed with my day with my little boy.”

Juliani and his wife Lilian welcomed their son early last month, close to a year since her dramatic separation with Mutua.

RELATED STORY:Lilian’s Hubby Juliani Speaks On Being Given A Powerful Post In Azimio After Mutua Joined Ruto