Mirema Shooting Aside, Meet Celebrity Thug Who Escaped With His Life Intact 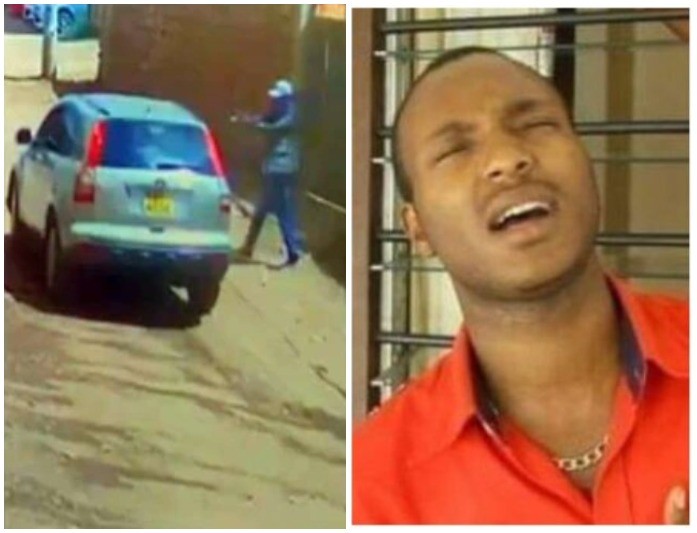 Mirema shooting victim was a notorious thug living a double life, another criminal masquerading as a singer is Sammy Boy.

The family of Samuel Mugo Mugota who was shot dead in Mirema Springs area are finding it hard to believe that he was a criminal who headed a syndicate that mostly involved women, who would be used to spike revelers’ drinks before stealing from customers.

Just like the family of the Mirema shooting victim is in denial, some fans of gospel singer Sammy Boy are also in denial about him being a thug.

Sammy Boy, whose real name is Samuel Mathenge Mwaniki, was sentenced to death by hanging after he was found guilty of robbery with violence on December 5, 2021.

The criminal musician will however not be hanged because Kenya doesn’t executes convicts, death penalty is usually commuted to life imprisonment.

Sammy Boy argued his innocence in a past interview with Inooro TV. He sought public sympathy claiming that he was innocent of the crime that earned him life imprisonment.

He argued that he only handled stolen items unknowingly but he was not a thug and has never been involved in any robbery.

According to the singer, he said that he was caught with stolen items which he was given by his friend who later died leaving him with the whole burden to carry by himself.

“He was from my village, the type of acquaintance that makes you not think twice when trusting him. He came to me one day carrying a television set, a gas cooker and a laptop. He had other effects that he asked me to keep for him in my house,” Boy said.

“He looked genuine. In any case, those were ordinary items that any person can own. I readily agreed to keep them since he told me he was leaving the city for some time and he did not wish to carry them along, that he would come for them at a later date,” said Sammy Boy.

The convicted singer noted that some of the items were suspicious as there were several mobile phones.

He added that it was not the first time that his friend, whom he identified as Onesmus Karanja, would leave items with him and later come for them.

Sammy Boy was arrested a week after Onesmus Karanja left the stolen goods at his house. Police came knocking on his door with a search warrant.

“I later came to learn that he had died in a road accident,” Boy said.

“I was taken to the Gilgil Police Station and charged with robbery with violence. The items had been stolen in Gilgil from some Europeans. I was arrested and stayed in remand for three months. Then I managed to raise a Ksh1.2 million bond and was freed as the case went on. In December 2021, I was convicted and jailed for life in February 2022.”

Sammy Boy’s claim led to some Kenyans feeling pity for him with many saying he is innocent as he claims. However, a witness came out to expose Sammy Boy as a notorious thug.

One person commented on the story where Sammy Boy argued his innocence and said the Kikuyu gospel singer was involved in multiple robberies.

According to him, Sammy boy is a criminal and that some of his friends were killed along Thika road. He asserted that the singer is a thug because he hired a car from his car hiring company which he used to commit robberies.

The witness stated that Sammy Boy used hired vehicle to steal from white people in Gilgil.

Police also assert that Sammy Boy is a thug who together with his accomplices had been robbing and terrorizing residents in Nairobi, Nakuru and Nyeri.

A report by detectives published by a local daily indicated that Sammy Boy had been given the responsibility of ensuring the stolen items are sold at a shop that he owned in Kinoo, Kiambu county.

When he was arrested, Sammy claimed that the items belonged to his friend Onsemus Karanja. However, the family where they conducted the robbery in Nakuru was able to identify him as one of the people who broke into their home and robbed them at gunpoint.

Sammy Boy burst into the limelight in 2011 when he started releasing single hits. But it was not until 2014 that his “No Ira Tu” (it was only yesterday) burst the charts.

Many of his fans still find it hard to believe that he is a thug. Inooro TV’s Simon Kibe recently indicated in a post on Facebook that he has reached out to popular lawyer Ndegwa Njiru to appeal Sammy Boy’s case.

According to Simon Kibe, he said that with his able lawyer everything for Sammy Boy will be fine. 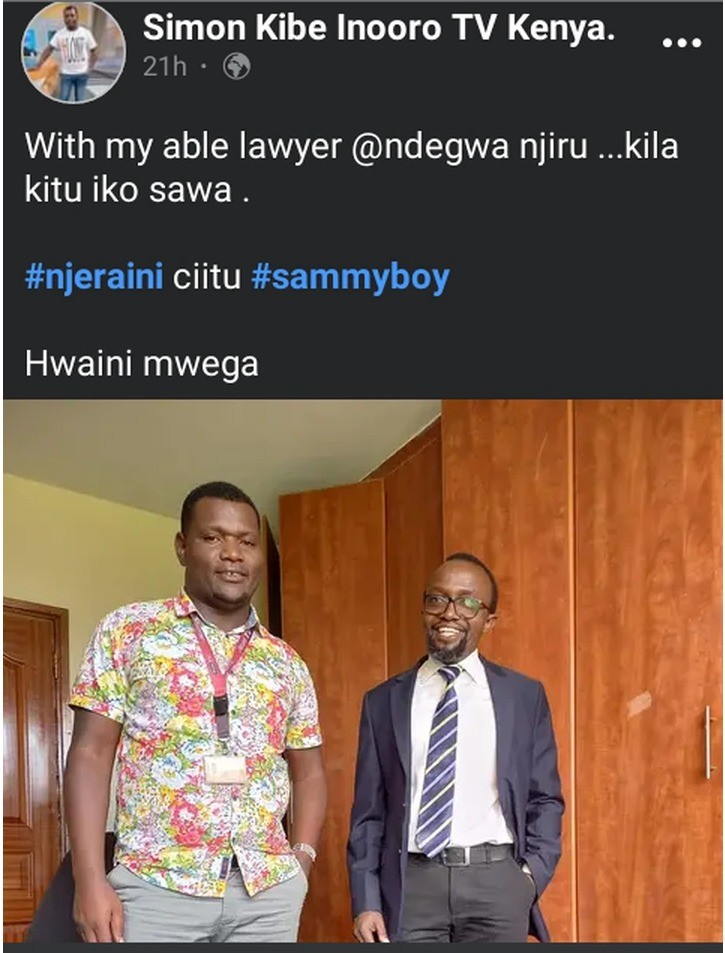 Just like the family of the Mirema shooting victim is in denial, Simon Kibe and some fans of Sammy Boy are also in denial that he is a thug because he was also living a double life.

Unlike Samuel Mugo Mugota whose criminal past caught up with him in the most cruel way, Sammy Boy only cheated death because Kenya no longer hangs convicts – otherwise he would be in the gallows with a noose around his neck.