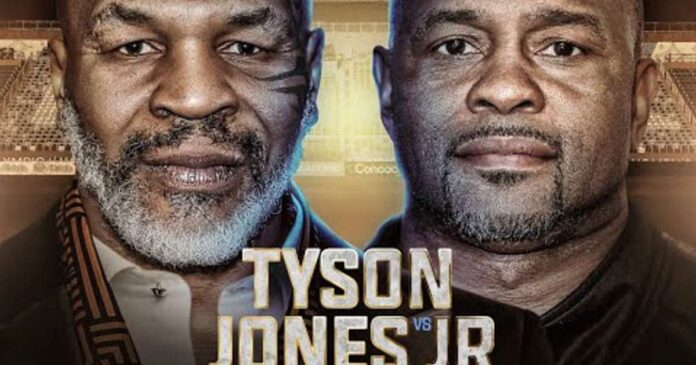 Mike Tyson was enticed with millions of dollars to come out of retirement to fight fellow veteran boxer Roy Jones Jr.

The legendary American boxer breaks his 15 year retirement to fight in the biggest boxing showdown of 2020, as Covid-19 pandemic interrupted this year’s boxing calendar.

Tyson and Roy’s fight will be the biggest boxing showdown of the year since most important fights were cancelled this year due to Coronavirus pandemic.

Iron Mike, 54, as he was fondly referred during his golden age, will square it out with Roy Jones Jr. 51, for the WBC frontline title on November 28th, in an 8-round exhibition clash.

The much awaited fight Tyson Vs Jones Jr. will be held at the Staples Center, in Los Angeles, United Stated.

Both Tyson and Jones were enticed with big cash reward to break their retirements. According to Yahoo Sports, Tyson will make a huge $10 million/Ksh 1.09 billion while Jones Jr will make $3 million/Ksh 329 million.

The eight-round fight between both men will have no official judges scoring the contest, no knockouts are allowed and if there’s a bad cut, the fight is over.

The two quinquagenarian boxers have been told not to try and knock each other out as there will be no judges scoring the exhibition fight.

California State Athletic Commission has said none of the boxers should be looking to win by KO (Knockout) as it’s an exhibition match.

“We can’t mislead the public as to this is some kind of real fight. They can get into it a little bit, but I don’t want people to get hurt. They know the deal. It’s an exhibition. They can exhibit their boxing skills, but I don’t want them using their best efforts to hurt each other. They’re going to spar hard, but they shouldn’t be going for a knockout. This isn’t a record-book type of fight. This is not world-championship boxing right now. It’s not what this is. People shouldn’t be getting knocked out. The public can see what kind of shape Roy and Mike are still in,” Commission executive director Andy Foster was quoted by Boxing Scene.