Miguna Miguna doesn’t have any chills to give and doesn’t care what people are currently saying on the ground after President’s mother, Mama Ngina Kenyatta was attacked by two members of Parliaments alleged to have been sent out by Deputy President, William Ruto.

The legislators in question are Emurua Dikir Member of Parliament, Johanna Ngeno, and his Kapseret counterpart, Oscar Sudi.

Both of them abused the President and his family this past weekend talking ill of President Uhuru Kenyatta and his mother, Mama Ngina Kenyatta.

Miguna Miguna who is always ready to chime in on matters of the country, despite being in exile went on to reiterate and support what Oscar Sudi and Johana Ng’eno said this past weekend.

Miguna Miguna bluntly said that the country doesn’t belong to Mama Ngina Kenyatta and his family and to the surprise of many, he called her ugly.

“UGLY NGINA MUHOHO KENYATTA: The embodiment of everything ugly, bad, criminal, tribal and rotten in Kenya.” Miguna Miguna tweeted sharing a photo of Mama Ngina to show who he’s talking about.

“She is a looter, land-grabber, murderer and tribalist. Kenya does not belong to Ugly Ngina and her crooked family.” he added.

Miguna Miguna went on to use the hashtags that he coined from the beginning, #UhuruMustGo #DespotsMustFall #RevolutionNow. 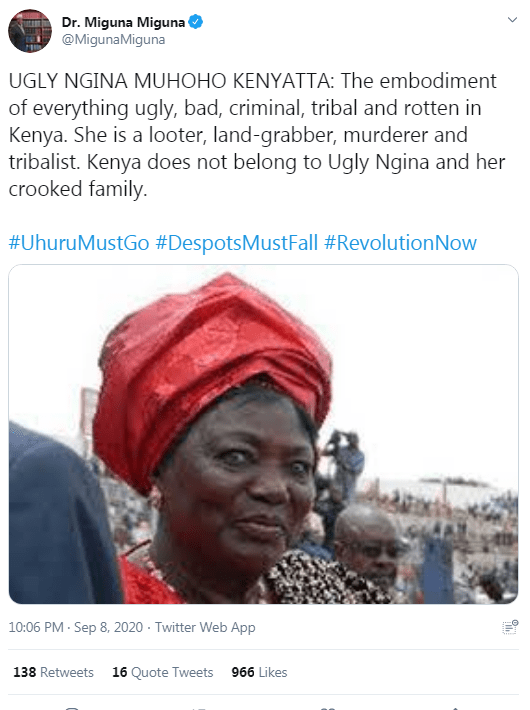 Man Killed By Clan Over Claims of Sexually Abusing A Goat