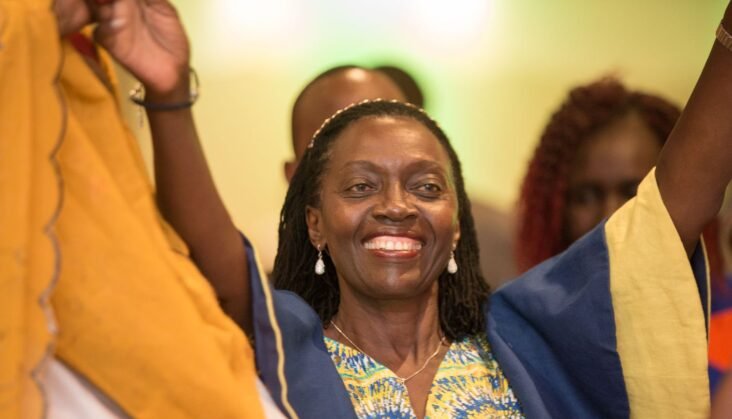 Martha Karua has broken silence after William Ruto was announced winner of the August 9 general elections in an event that was organized at Bomas of Kenya.

Through a tweet on her official Twitter account, Karua reiterated her previous words “It is not over till it is over ” insinuating she has not conceded defeat. Those are the same words she used when people bashed her over not delivering votes to Raila Odinga in her backyard.

Her presidential candidate  is yet to make a comment about the final results of the hotly contested elections.

The ODM leader was not in Bomas when the presidential results were declared.

His close allies have however indicated that their fight for the presidency is not over yet and they would be challenging Ruto’s win especially because Chebukati did not have enough backing of the required number of commissioners to declare Ruto as the winner. This is because four out of seven IEBC commissioners distanced themselves from the results before the chairman made his announcement.

“A travesty has been nipped in the bud. Kenya’s democracy shall endure. @makaumutua,” Suna East MP Junet Mohammed said in a tweet moments after Chebukati’s announcement.

On Saturday August 13, Karua led top Azimio leaders and those who had been elected in the August 9 general elections in a conference where she expressed confidence that victory was theirs.

“There’s no way the tally can be against us. The forms were on the IEBC portal, we took copies and we tallied. We know where we are. If we had the power, by now, we would have called it for ourselves … But we will wait for that announcement,” Karua said during the conference that was held at KICC.

Wiper party leader Kalonzo Musyoka who was also present said that they could not announce themselves as winners because that was Chebukati’s duty.

“We have majority MPs as Azimio la Umoja, majority governors. We had to debunk this thing that was circulating on social media to the contrary and we are now waiting. We are confident of the win. We can not announce we are not Chebukati but we know that justice is going to be served,” Kalonzo said.

RELATED STORY:Ruto Reveals The Secret Behind His Successful Presidential Bid