It is now close to a year since Lilian Ng’ang’a and Machakos governor Alfred Mutua made public their break up putting to an end their decade long relationship.

Lilian moved on from the relationship and got married to singer Juliani in a low key wedding in February this year and the two have been rumoured to be expecting a child.

Lilian has however not ceased from throwing shots at Mutua thus giving more hints on how their relationship might have been behind the closed doors.

In a recent Instagram post, Lilian claimed that she has been a minimalist for the past four years and had to shed off distractions just to maintain the status. According to her, that is the best decision she ever made.

“I have been a minimalist for 4 years now. One of the best decisions I’ve ever made. Minimalism can be more than just removing physical possessions. It is also about deciding what is most important in life- and removing the distractions that keep you from it,” Lilian said. 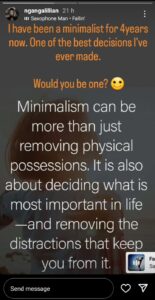 Weeks after making public theirs separation. Lilian had noted some of the reasons why their relationship failed.

According to her, Mutua had been inconsistent is some of the issues they had had as a couple.

“The second issue was being a control freak. This, I guess, is because he has been in government and so he is used to controlling people. Over the years I have always done things his way.

“Last year, I told him I needed to do a few things independently, but he was not comfortable with that. It led to a lot of fights between us,” she said in a previous interview with Nations.

Lilian and Mutua met back in 2011 during a flight to Mombasa. She was working as a flight attendant.

Female Politicians Who Have Rendered Their Powerful Male Counterparts Jobless