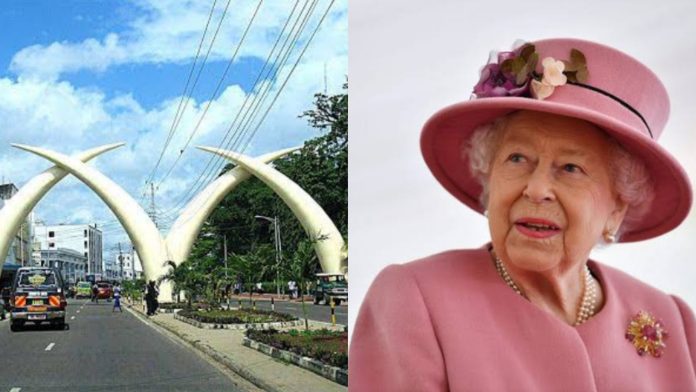 The four elephant tusks monument along Moi avenue in Mombasa have for a long time served as a key identifier of the coastal city and county.

Not so many people however know the history of the monument as many believe that it was erected just to beautify the city.

History however reveals that the elephant were erected in 1952, to commemorate Queen Elizabeth’s(II) visit to the city. At the time, Kenya, just like many African countries, was still under the colonial rule of the British.

“When she came here, she was welcomed by the British Coastal administrator as well as the locals. A ceremony for her was conducted for her  in Jubilee hall. There was the tusks business and they used to be transported through here, but many wealthy people used the tusks for beauty and  that is why the tusks were used,” a Mombasa resident told a local media house.

The British administration in the country initially erected two tusks, made of wood and canvas, on the highway which was then referred to as Kilindini road. The road was a one way lane and it led to Queen Elizabeth’s residence at the Mombasa club. The road was later expanded to two lanes and an additional pair of tusks was erected in 1956 by the municipal council.

The monument was also renovated because Queen Elizabeth’s younger sister, Princess Margaret, was to visit the region. During the renovation, new tusks  made of “weather-resistant aluminum” were erected.

The monument became an attraction and many people would visit it as others used it for filming and advertising.

The monument is currently under the protection of  National Museums of Kenya (NMK) and those who want to use it for commercial advertising and filming are charged.

“We charge 1,000USD for one day and Sh7, 000 per hour to those who want to shoot the monument for commercial purposes,” the head of Historic education at Fort Jesus Raphael Abdulmajid previously told The Nation.

Both local and international tourists are however not charged to visit the monument.