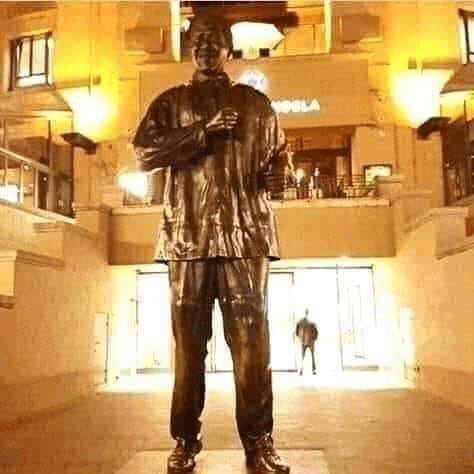 “South Africa erects a statue of Raila Odinga. To signify respect in common for Raila Odinga and Nelson Mandela,” read the caption for the photo.

The image was treated with various reactions on social media as Kenyans combed through the statue in an attempt to investigate its credibility.

As natural as Kenyans are, they couldn’t stop but to see something peculiar about the photo. One curious Kenyan Kenya spotted the letter “NDELA” just behind the statue which triggered the further probe.

“Desperation is real to the point of Mandela’s statue being altered??”

“This is meant to be Mandela” read some of the Twitter users who were quick to spot the fake statue.

Either way, some of the users bought the idea to an extent that some of them even lauded the opposition leader for the monumental achievements. On the other side, other users ranted about the essence of erecting a Raila statue in South Africa.

The Nelson Mandela statue was originally erected in conjunction with the 10th anniversary of South African’s first democratic elections.

The objective of the statue is to pay homage to Nelson Mandela who took office after the end of the apartheid system.

Mandela’s struggles, commitment to the anti-apartheid regime, and political stance made him a key political figure in Africa as a whole.