Through his official Facebook page, governor Oparanya urged the Kakamega residents to vote for Cleophas Malala of the Amani National Congress.

However, the move left many people confused with others wondering how the governor who has been a staunch Raila supporter would do that. 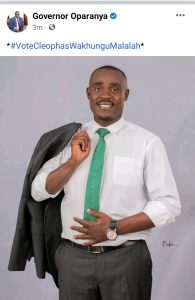 At the same time, others opined that perhaps Oparanya’s Facebook Account had been hacked by the Kenya Kwanza brigade to give Cleophas Malala a political mileage.

On his side, governor Oparanya is yet to distance himself from his post bakcing Ruto’s candidate Cleophas Malala which has left many people even more confused.

Oparanya being the Orange Democratic Movement Deputy party leader who has been campaigning for Ferdinand Barasa to take over from him. Barasa is facing the vibrant Kakamega senator Cleophas malala in the hotly contested race which is a do or die for both raila and Ruto to stamp their political authority.

The Independent Electoral and Boundaries Commission (IEBC) to the shock of the Nation on 8th of August postponed the Kakamega and Mombasa gubernatorial polls.

According to the IEBC, the postponement was informed by a mix up in printing of the names at the ballot papers.

The move was condemned by the Azimio leaders who argued that it was carefully planned and designed to disadvantage presidential candidate Raila odinga by reducing the general voter turnout in the two counties.

RELATED STORY: Details Of 56 Hackers That Manipulated Form 34A Results Before Uploading To The IEBC Portal For The Media To Tally