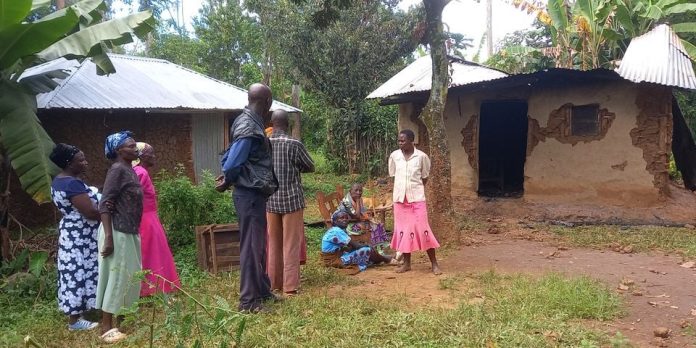 Floice Lisero, was killed in the fire that destroyed her home in Kakamega.

The accused, a 40-year-old man, is alleged to have attacked his grandmother for refusing to give him money. He may have also been taking drugs excessively, which caused him to act violently.

According to Samuel Kogo, the Khwisero sub-county police chief, the suspect was saved by police after people attempted to kill him at the Ebukambuli market as he escaped the area.

“We have to take him to be examined by a psychiatrist to confirm his state of mind before preferring any charges,” explained Mr Kogo. The police officer accused family members of neglecting to safeguard the elderly grandmother who shared a home with the obvious dangerous grandson.

The deceased’s first-born child, Ms. Mary Okiso, 70, claimed that the suspect assaulted her mother after asking her for money.

The village elder had visited her home and notified her that, government had distributed money to be handed to the elderly, and the suspect allegedly believed her grandmother, who is a recipient of the Cash transfer program, had gotten some funds.

“He thought his grandmother had withdrawn the money because the previous day, the area village elder visited her to inform that the money had been released by the government and was ready for withdrawal.”

“When I visited her on Monday morning, I met the village elder, Joseph Njeka, who informed me that the money was ready and that I needed to go with my mother and withdraw the cash for her. But I had left her documents, which are under my custody, back in my home and promised to come the following day and take her to the bank,” said Ms Okiso.