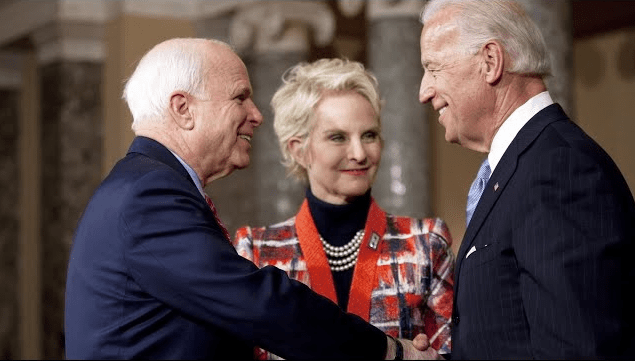 Cindy McCain, the wife of late Arizona Republican Senator John McCain, has said that her late husband would have wanted the Republican party to recognize Joe Biden as President-elect.

Cindy’s sentiment come as President Donald Trump and other Republican leaders have largely refused to acknowledge the results of the election.

McCain widow believes her late husband would be telling his Republican colleagues, “It is time that we move on. It’s time that we heal, it’s time that we support our President-elect,”  she told CNN in reference to her husband’s concession speech when he lost to Barack Obama in 2008.

Cindy also said her late husband would encourage the General Services Administration to release the funds so that Biden can get on with his transition team.

The agency has yet to formally recognize Biden’s victory, thus denying him some funds for his transition as well as access to some national security tools.

Cindy’s endorsement for Biden played a big role in helping him win the state, only the second time in seven decades that the state has been won by a Democrat.

Trump lost Arizona because he disparaged the state’s favorite son – John MacCain. Despite being a republican, McCain was a man of integrity and never shied away from criticizing Trump’s divisive politics.

In 2019, after the senator’s death, Trump said he was never a fan of John McCain and that he never will be.

Trump even alluded that McCain was not a war hero. The late senator fought in America’s Vietnam war and was captured and imprisoned for five and a half years.

“He’s not a war hero. He was a war hero because he was captured. I like people who weren’t captured,” said Donald Trump at a campaign rally.

Before his death, McCain insisted his eulogies be delivered by President George W. Bush and his opponent in 2008 President Barack Obama. Trump wasn’t invited to the funeral.

Related: Biden To Trump: Blocking Transition Is An Embarrassment And Will Not Help Your Legacy