The 24 year old Nyali woman accused of stealing 1.7 million after spiking a man's drink at a certain entertainment joint has been released...
Read more
Home News Inside A Successful Life Of Ashura Michael,Lady Who Offered Herself To...
NewsPolitics
October 27, 2020 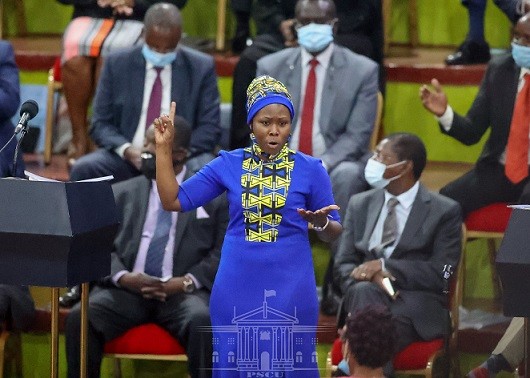 Speaking in sign language, a wisecracking Ashura Michael, deaf human rights and gender activist, said she had heard that Uhuru was considering marrying a second wife and she wanted to take the Head of State up on his offer.

“Mr President, you were recently in Kisumu and I heard you say you are looking for mpango wa kando (side chick). I know mama (First Lady Margaret Kenyatta) agreed. My father Raila is here and he is ready to take the dowry and if my brother the Deputy President agrees, he will be the best man,” Ashura said as the auditorium broke into a fit of laughter.

Uhuru laughed as if he had never heard anything funnier. He fist-bumped Raila and gestured to Deputy President William Ruto, who were seated next to him on the dais, perhaps asking if he should go ahead.

But that aside, how well do you know Ashura Michael?

All her life, Ashura Michael has been guided by the words of Mother Teresa: “I alone cannot change the world, but I can cast a stone across the water to create many ripples.” 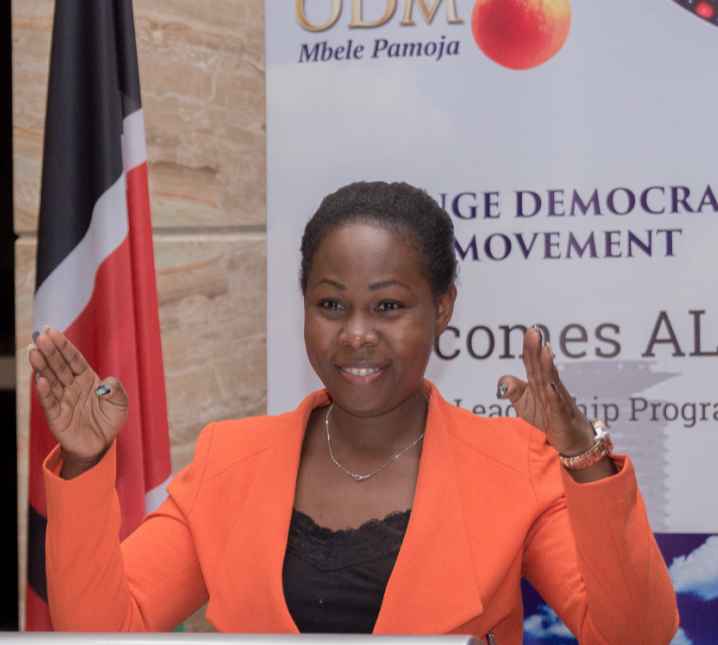 And for sure she has caused many ripples. The latest feather on her cap was when she was recently elected speaker of the East African Youth Assembly, a group of 100 young people drawn from across the region.

“This was quite an honour for me. Being recognised by your peers is a sign that they trust your leadership qualities,” she says.

Trailblazing seems to be second nature to the 27-year-old hearing impaired human rights and gender activist. 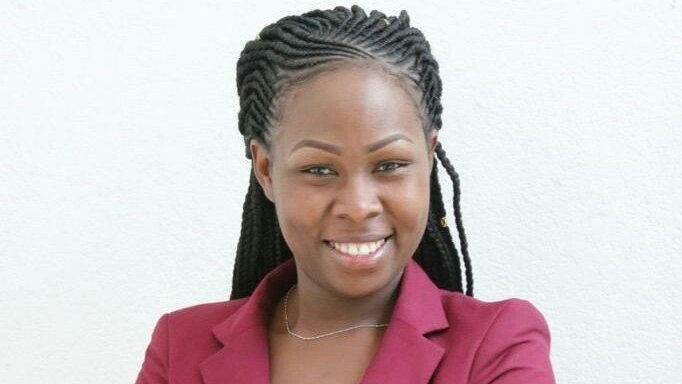 Her experience represents the life of a hearing impaired person in Kenya. “I am passionate about advocating for the rights of persons with disabilities in Kenya,” she says. 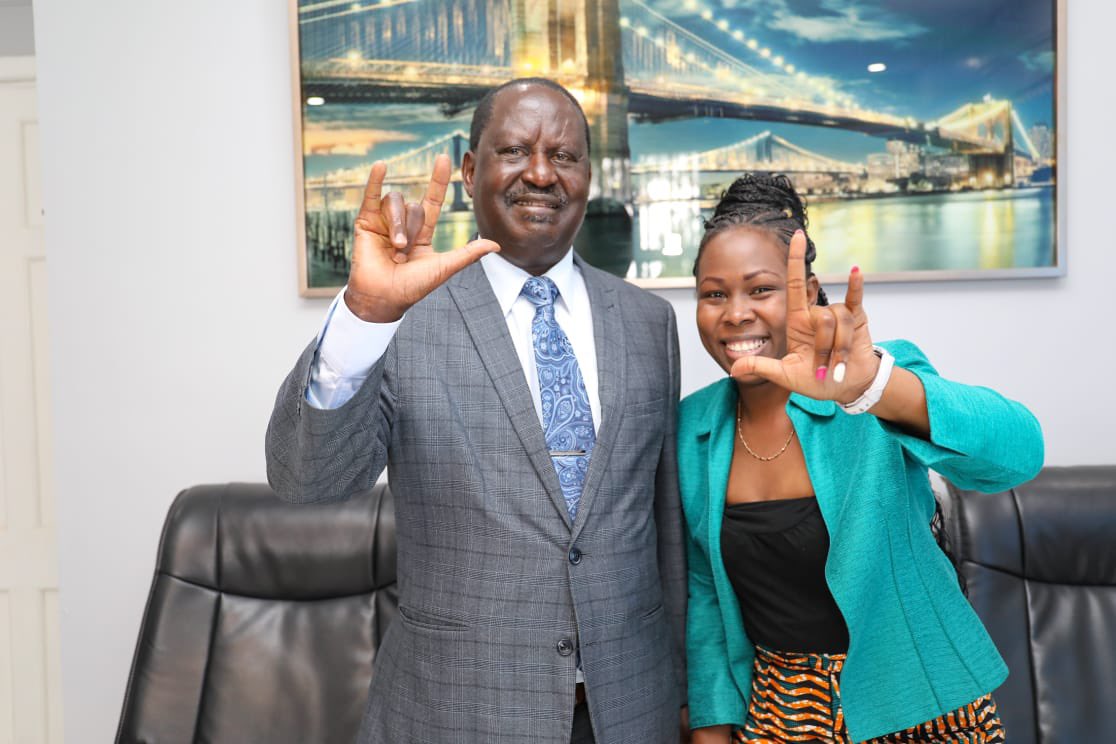 An orphan, Ashura was not born deaf. She lost her hearing at the age of four due to measles.

But this has not stopped her from setting the pace in leadership. Ashura was once a co-chair for the youth council in the United Nations Children’s Fund Global Partnership on Children with Disabilities.

She was a gender and social inclusive officer at Peace Ambassadors Integration Organisation for two years and a special interests representative of Youths Synergy Kenya. She is a board member of Positive Young Women Voice and has served a number of national and international organisations. 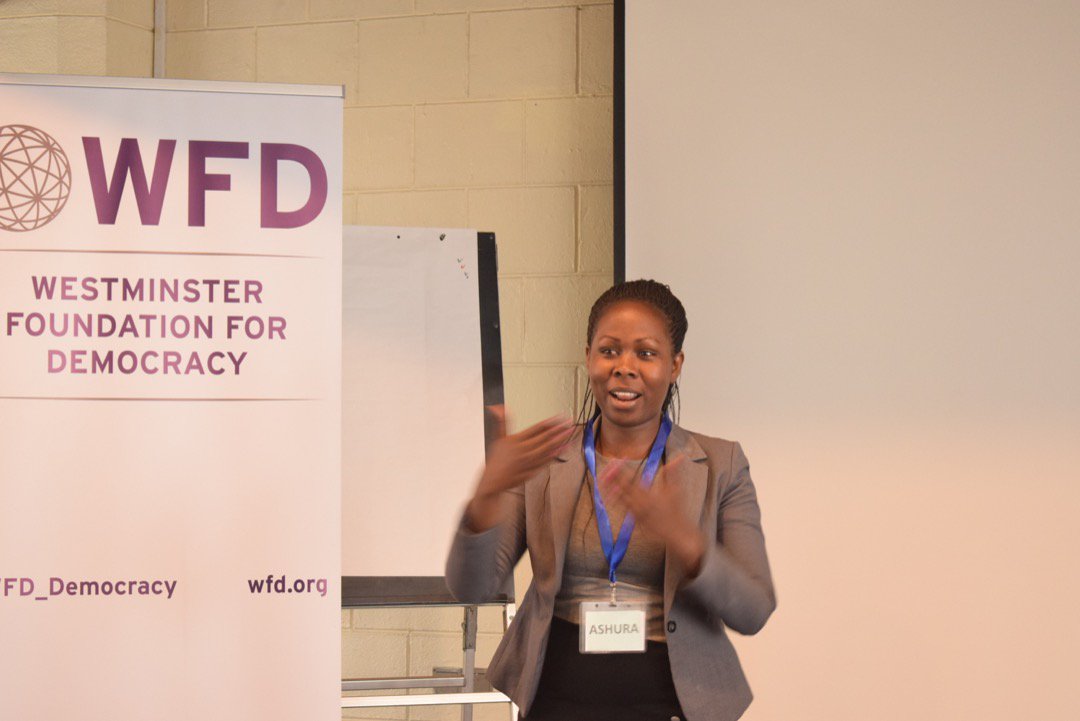 “Ashura Michael is a young deaf Kenyan who is passionate about her own course. Her appointment to the position is an inspiration to many deaf in this country,” said Senator Gertrude Inamah.

She said Ashura’s appointment is a major victory for persons living with disabilities.

“Among the main categories of disability, the deaf are the most excluded, marginalised and hardly understood. I am happy about this appointment because, the East African Legislative Assembly (Eala) will then be obliged to implement article 120 of the Constitution. The article states that parliamentary official languages are English, Kiswahili and sign language,” said Dr Inamah.

She said with Ashura’s appointment, the assembly will have no choice but to take sign language more seriously. 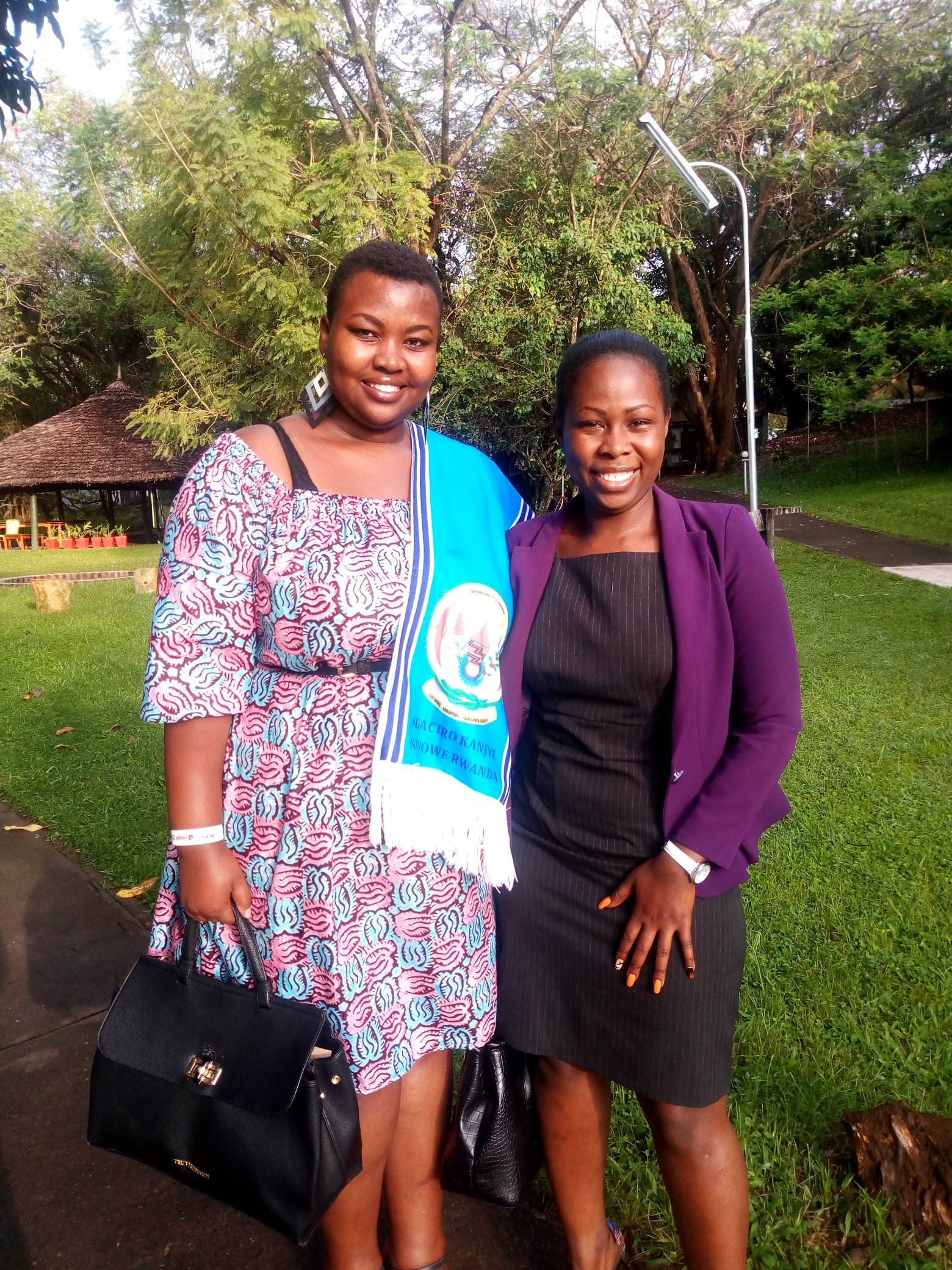 “We have not had sign language interpreters inside of the chamber but I am amazed and excited that this appointment will ensure that the house consider taking issues of sign language seriously,” she said.

Ashura has led a group of young campaigners to advocate for sign language interpretation services during news segments on television and making braille easily available for the visually impaired.

She is also the founder and director of Free a Girl’s World Network (FGW-N), an organisation that aims to empower the girl child.

She has won several humanitarian and leadership awards and was also appointed as a commissioner for developing countries during the World Congress of the Deaf in Istanbul. 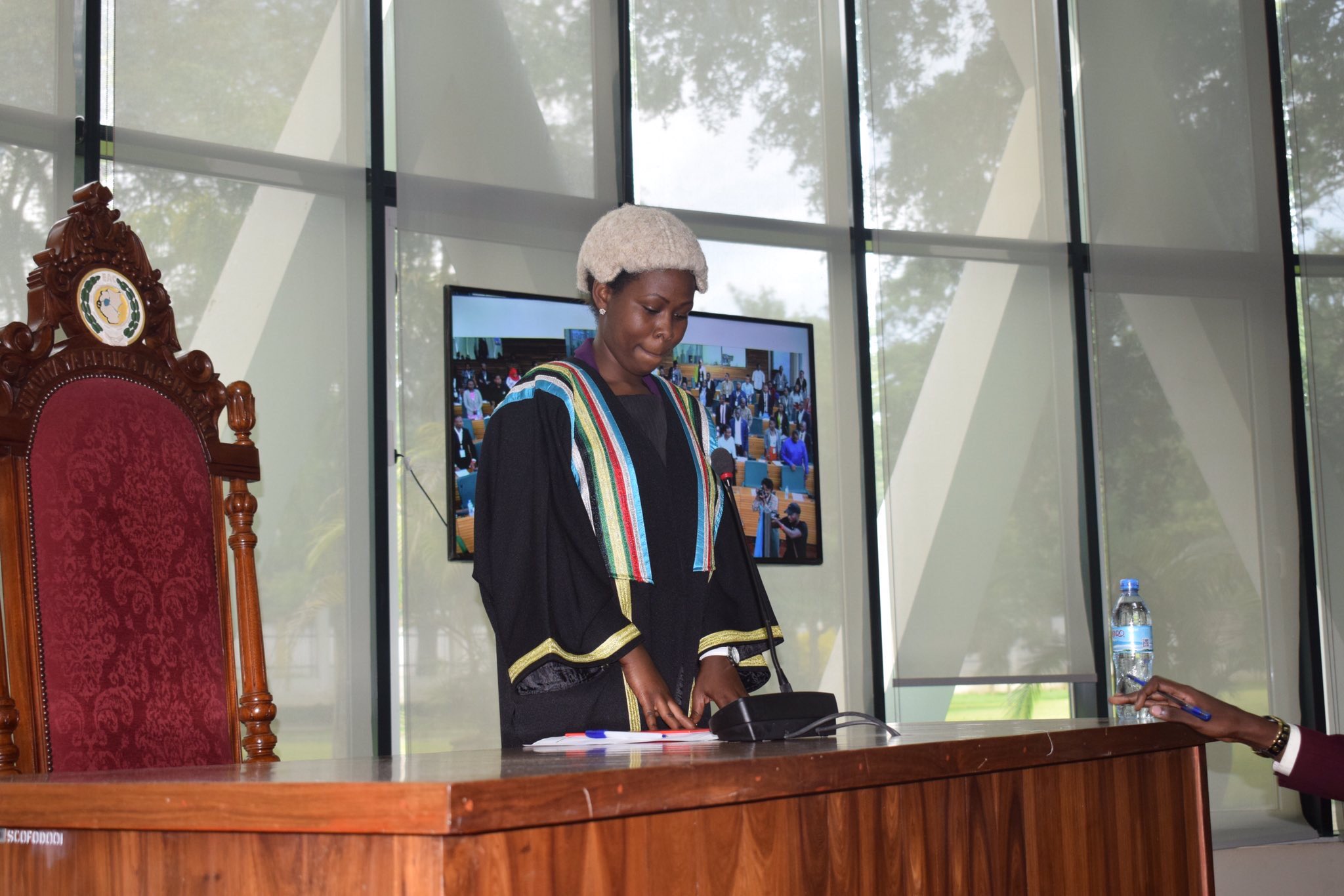 Ashura is a 2016 Mandela Washington fellow and travels around the world assuring young girls with disabilities that they should not let this get in the way of achieving their dreams.

She has also been active in political party activities to make sure that persons with disabilities are not left out in the political arena.

She spearheaded the formation of the Orange Disability League that was launched in November 2016.

Her Own TV Show 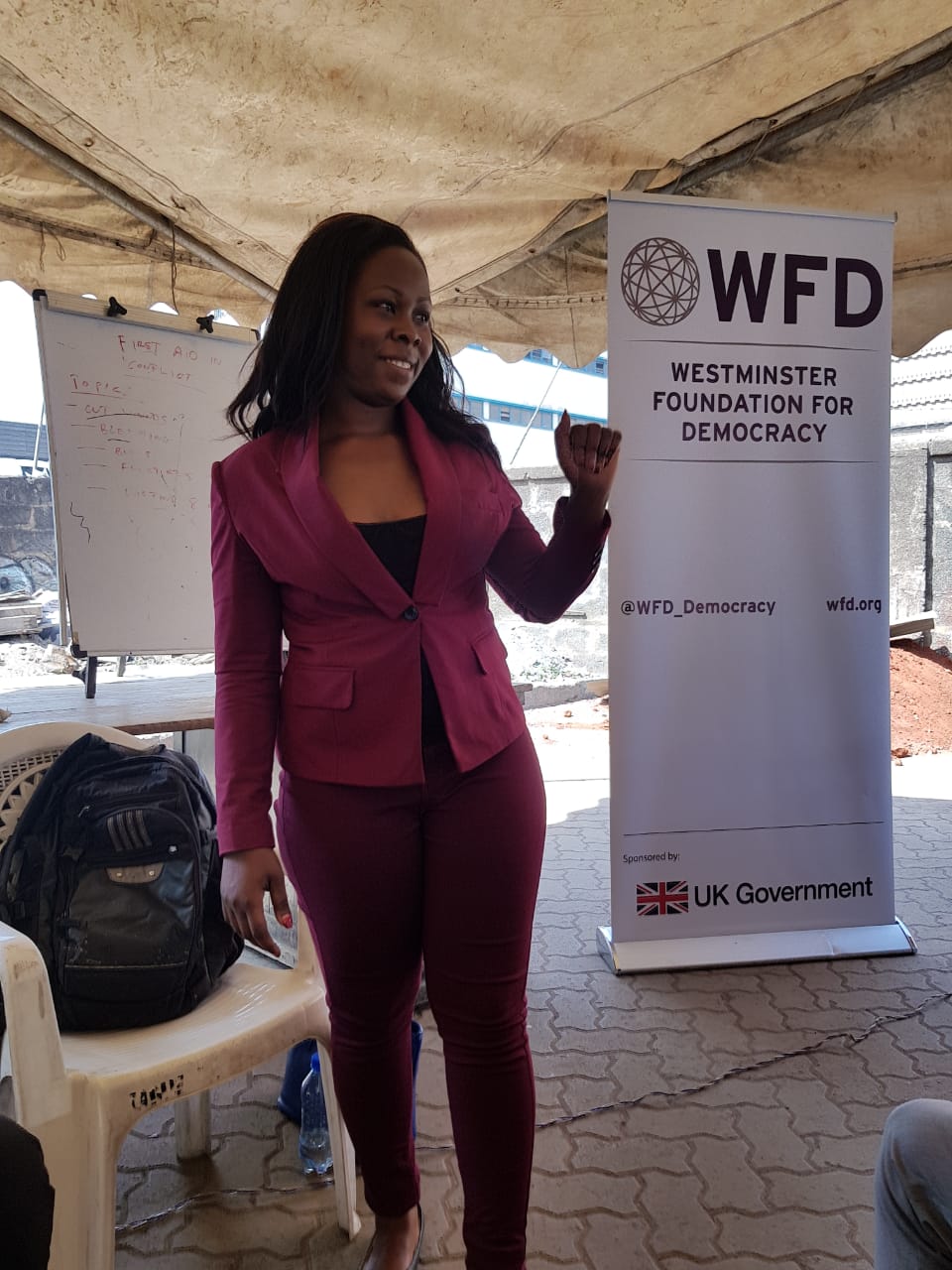 She started a TV show, “The Handshake with Ashura,” and Signs TV, the first ever TV station dedicated to persons with hearing impairment. For this, she won Sustainable Development Goal ambassador award, Utumishi Bora Award, Digital Inclusion Award and Diversity Award.

Currently, she is a board member of the National Council of Persons with Disabilities and co-chair of the Africa Charter on Democracy Election and Governance-Kenya chapter.

Her dream is to be the first deaf senator in Kenya come the next general election.

The 24 year old Nyali woman accused of stealing 1.7 million after spiking a man's drink at a certain entertainment joint has been released...
Read more

The 24 year old Nyali woman accused of stealing 1.7 million after spiking a man's drink at a certain entertainment joint has been released...
Read more
News

North Korea's president Kim Jong Un is once again making headlines for all the wrong reasons, this time round over his draconian Covid-19 prevention...
Read more
News