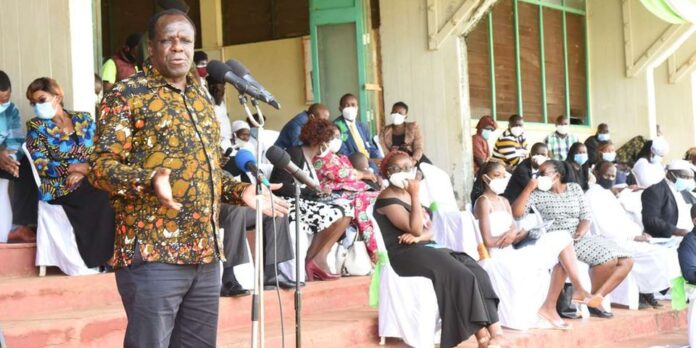 Governors have now threatened yet another shutdown of the 47 devolved units citing starved of funds, unable to pay supplies, and facing constant strike threats from employees whose dues have not been paid for months.

In a letter to the National Treasury Cabinet Secretary Ukur Yatani, Chairman of the Council of Governors, Wycliffe Oparanya said the funds should be released sooner.

Oparanya noted that the counties had not received the last three months – November, December, and January disbursement totaling Sh94.7 billion.

The county bosses are already battling with the ongoing nurses’ strike, with the governors having declined a return-to-work formula that the Ministry of Health signed with doctors, citing empty coffers saying they are not involved.

“Please note that if the disbursement is not made forthwith, the county governments will have no other option other than seek legal redress while closing down to minimize further damage and suffering of employees,” Oparanya said.

In September 2020, the governors partly shut down county services and sent home staff over the revenue sharing stalemate.

Governor Oparanya in a letter dated January 11 said the Treasury failed in its statutory role of disbursing the monthly locations to counties “despite stringent timelines set out in the law.”

Oparanya said the delay had led to stalled projects since contractors have not been paid. He also noted that the development budget had not been implemented while statutory deductions go unremitted.

The delayed release of funds despite the Senate approval of the disbursement schedule has recently attracted the ire of the Controller of Budget Margaret Nyakang’o.

Oparanya further noted that the delay in the disbursements of the funds will cripple the devolved units.

“The delayed disbursement has hindered service delivery especially during the wake of Covid-19 pandemic when the counties are expected to be at the frontline in offering health services,” Oparanya said.

“County government civil servants have not been paid for three months while national government’s have been paid all their dues and statutory deductions made,” he added.

Related: Counties Close Down Operations Over Lack Of Funds