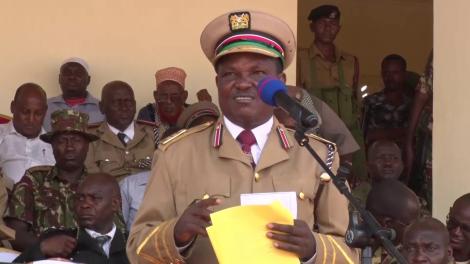 Mandera Governor Ali Roba is on following reports he allegedly made regarding the grip of the Al Shabaab militia on Kenya’s North-Eastern region.

On January 8, 2021, Governor Roba allegedly claimed that the militia group has control of about 70 percent of Mandera county. The further accused area residents of harboring the militia.

While addressing the media on Tuesday, January 12, Mandera County Commissioner Onesmus Kyatha disputed the governor’s claims stating that the police will engage the governor about the comments.

Kyatha emphasized that the police and security personnel in the region had been dispatched across the county to tame attacks by the terrorists.

“If you talk about 70 percent of the county being overrun by Al Shabaab, that is not factual. We only have isolated cases of attacks.

“You know how these bandits operate. They are unpredictable, they behave like gorillas playing hide and seek. They cannot control 70 percent of the county,” Kyatha said.

“We have officers across the county, including security personnel. You cannot say 70 percent of the county is controlled by bandits. That is not factual. We will engage him in order to get to the bottom of those statistics,” he added.

According to the county commissioner, the police had ensured security in the region by escorting public transport buses.

He noted that the government was determined to fight terror highlighting that functions in the county were running smoothly. Kyatha reiterated that Mandera county was only experiencing isolated cases of attacks noting that it was not enough for the governor to make the assumption.

The police boss appealed to members of the public to help the State fight terrorism by alerting the security forces.

“Al Shabaab is a global phenomenon and the government is determined to root them out from Mandera,” Kyatha said.