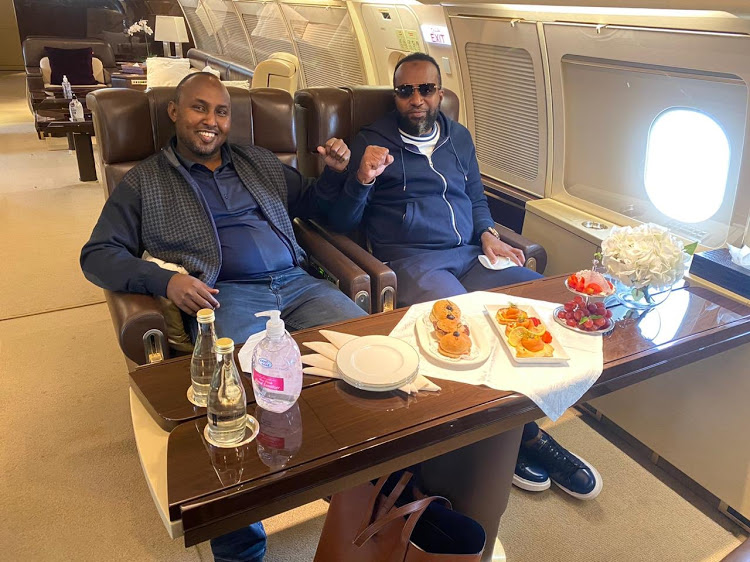 Through their twitter handles, Governor Joho and Suna East Mp posted photos of them ready to board a private plane to Dubai.

On the post, the Mombasa Governor photos when they were on board and were welcomed by a sumptuous fruit salad.

This comes just a week after the Opposition chief updated his fans on his health condition. Raila told his followers that he was feeling strong and rejuvenated after undergoing nerve surgery at the German-based hospital in Dubai.

On the twitter video shared by his lastborn daughter, Winnie Odinga, Raila thanked his friends and supporters who sent him messages of goodwill.

The action by the two leaders has brought different reactions of Kenyans on Twitter.

One Abuga Makori EGH, MBE wrote: ” True Friends would always use their resources to know your whereabouts H.E Hassan Joho and Suna Democrat Junet Mohamed love Baba Raila Odinga. This jet wasn’t chartered by GoK.  I know some bodies are keen to make it a scandal.

Lion Muigi wrote: “Junet and Joho are off to Dubai to see you fev co. President Raila Odinga! Why cant they use zoom to check on him? I thought the airspace was shut till 1st of August! Handshake inafanya mambo. If it was in 2017 the jet wud ve been brought down via korombosta ya DJ afro.”