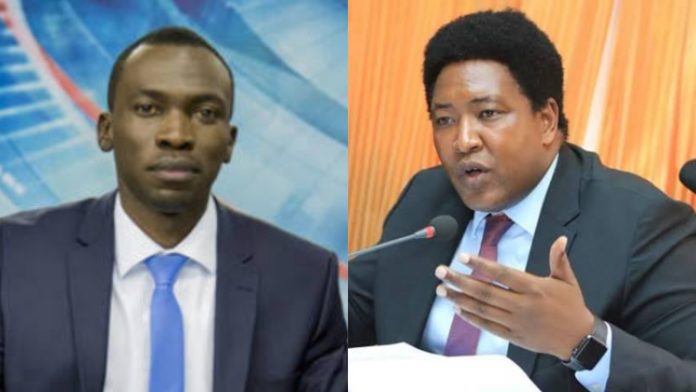 The panelists were discussing the integrity issues that some of the cabinet secretary nominees like Aisha Jumwa and Mithika Linturi were facing and if it was right for the president to pick on them when he could have appointed other people without issues in the same capacity.

While contributing to the matter, Ledama said if the president believes that he will deliver his mandate through politicians, instead of technocrats and people that have questionable characters, he will do his job of scrutiny, criticism  and correct all the mistakes that they will make.

Trevor however tackled him on the issue of questionable character because he exhibited the same at Bomas of Kenya during last month’s general elections.

“Speaking of questionable character, Ledama, you were seen at Bomas taking matters into your own hands…” the journalist said.

Ledama however hit back at him for going out of topic.

“Give me a breathing break. You should compare apples to apples… actually what I was acting as a Kenyan who wanted to know the truth. It is not about questionable character. Am I seeking to be come the cabinet secretary of constitutional matters, no, the issue I was asking there is can you show us the results … I actually feel a little bit violated by you asking that question,” the senator said.

He however said that her is willing to talk about the Bomas matter if he is called to discuss it adding that it was a very painful moment for him as he nearly lost his life.

“Call me and lets debate that issue  but don’t call me here when we are discussing other important issues and we are moving forward and taking me back. It is a very painful process for me, I could have been killed back there. If you are asking me questions about the ordeal of that day, I am willing to debate you 10 hours,” Ledama said.