The Secretary-General of COTU, Francis Atwoli has proved that he might be more than ready to be the next political head when it comes to Western politics.

The outspoken businessman and an accomplished public servant hosted almost every politician coming from the Western region of Kenya.

A huge number of western politicians RSVPd his meeting but some like the former Senator Boni Khalwale and Musalia Mudavadi didn’t attend.

Sharing a picture of all the politicians who came to listen to him, Francis Atwoli was called out by Khalwale for allegedly not doing more than enough for his kinsmen, especially in places like Budalangi, Khwisero, Navakholo, Mumias, and Lugari.

“But not a pellet of food for their kinsmen displaced from their homes by floods & currently living at primary schools in Budalangi, Khwisero, Navakholo, Lugari & Mumias”

The COTU Secretary-General didn’t take the Boni’s observation lightly and answered right back putting Boni Khalwale in his place leaving him no opportunity to come back with a witty response.

“From the onset of this pandemic, COTU has worked hand in hand with FKE and GoK to cushion workers from the effects of COVID-19.” Atwoli responded. “We have since entered into an MoU with GoK which is public.”

To throw the “ball on Boni Khalwale’s court,” Francis Atwoli who might arguably be the next big political figure coming from Western Kenya if he chooses to run for any position come 2022 posed a question that wasn’t as rhetorical as it might look like.

“As a medical doctor, what have you done?” Atwoli asked the professional doctor 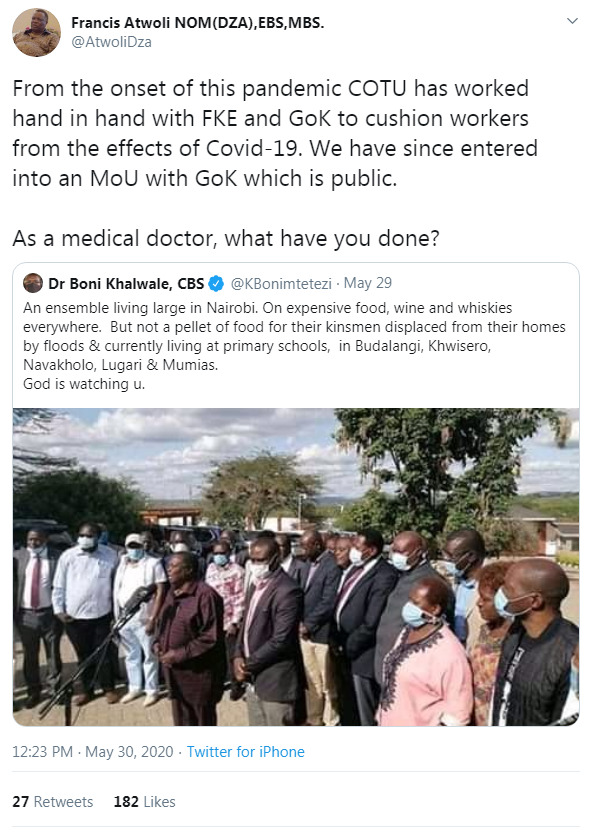