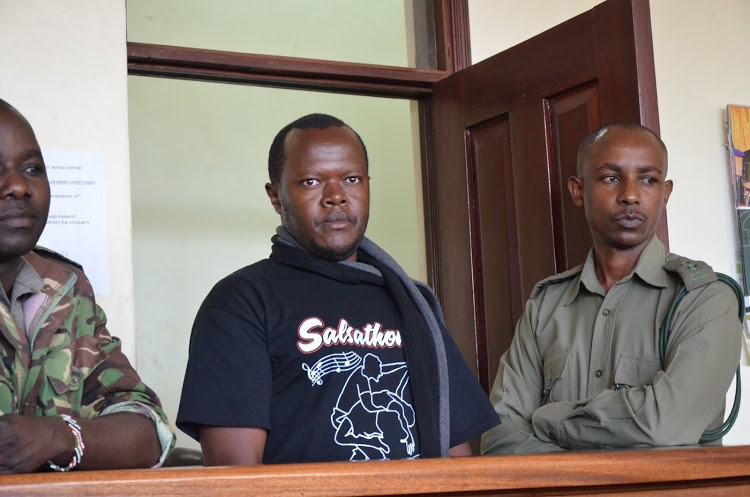 The ex-military officer at the Laikipia Air Based accused of killing his ex-wife and two children have asked the court to allow him to get back his ATM cards and other personal items held by the police.

Major Peter Mugure told the court that detectives took away his ATM cards which is not instrumental in the murder case, where he is caused by killing his ex-wife Joyce Syombua, Prince Michale, and Shanice Maua.

“They took away several personal items including my ATM cards. I’m asking to have them returned to me because I do not think they are part of the evidence,” Mugure told Justice Abigail Mshila in a virtual court session.

Even though some of his personal belongings could be used as part of the evidence in the case, Mshila asked Mugure to make item lists and asked defense counsel to check the inventory and make an application for the release of the items that are not needed as evidence.

“Some of the personal items like clothing, or ATM cards could be taken for analysis to enable show your movements. The inventory is in the prosecution file and you could make a list of the items you need to be released,” said Mshila as reported by the Standard.

Major Mugure is jointly accused with Collins Pamba, a former employee at Laikipia Air Base. Their case was supposed to be heard on Tuesday but was carried forward to a later date following the transfer of judge Jairus Ngaah who was handling the case in Nyeri.

Mugure and Pamba were accused of killing the deceased persons on October 26 last year at the Laikipia Air Base in Nanyuki.

The deceased bodies were found in a shallow grave after Pamba led police to the site at Kilimo area in Thingithu, the outskirts of Nanyuki town.

In a previous ruling, Mugure was denied bail, Justice Ngaah citing damning evidence in Pamba’s affidavit implicating Mugure in the gruesome murder of his ex-wife and two children.

According to the court records, Pamba’s detailed how the ex-major called him from Nairobi on a material; day and asked for his help to ferry and bury the bodies and in return, help him secure employment at Kenya Defense Forces.